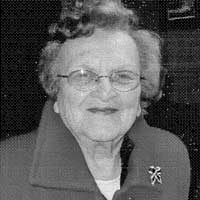 In loving memory of Stefania Bjorklund, a resident of Manitoulin Lodge and formerly of Kagawong, who passed away peacefully with her loving family at her side at the Manitoulin Health Centre, Little Current Site, on Friday, August 9, 2013 at the age of 88. She was born in West Bend, SK, daughter of the late Joseph and Katharine (Popik) Bryksa. Stefania married Clarence in 1948 and moved to the Manitoulin in 1958 from Foam Lake, SK. Stefania had worked in the cafeteria of M.S.S. from 1974-79. She loved to cook. She enjoyed playing cards, listening to music and visiting with people. She had a sense of humour like no other. She adored her family greatly and loved spending time with them. Stefania was predeceased by her beloved husband Clarence in 1991. Loving and loved mother of Wanda (Tom) Nighswander of Gore Bay, Joellen Sloss (Floyd Becks) of Kagawong, Annabeth (Wayne) Aelick of Kagawong, and daughter-in-law Judith Bjorklund (Robert Breathat) of Spring Bay. Predeceased by son Douglas in 1980. Beloved grandmother of Trisha (Aure), Christopher (Kelly), Alison, Jeness, Tanya, Joelun, and Darron and great-grandmother of Ethan and Carson. Special granny to Mark, Kurtis and Drew. Predeceased by grandchildren Aaron and Jenna. Sister of Anne (John) Holowaty of Foam Lake, SK, Myrtle (Aubrey) Marknette of Mississauga, ON, Joseph (Elaine) Bryksa of Foam Lake, SK, Edna (Mervyn) Yaschuk of Ice Lake, ON and sister-in -law of Betty Bryksa of Regina, SK and Shirley Bryksa of Winnipeg, MB. Predeceased by brothers Fred, Merle, Harry, Steve, Edwin, Walter, Emil and sister Olga. Survived by many nieces and nephews and numerous cousins across Canada. Friends called at the Culgin Funeral Home on Monday, August 12, 2013 from 7 pm to 9 pm. The funeral service was held in the W.G. Turner Chapel on Tuesday, August 13, 2013 at 11 am with Reverend Janice Frame officiating. Interment in the Kagawong Cemetery. Donations to the Heart and Stroke Foundation, Cancer Society or a charity of your choice would be greatly appreciated. Online condolences may be left at www.culginfuneralhome.ca.