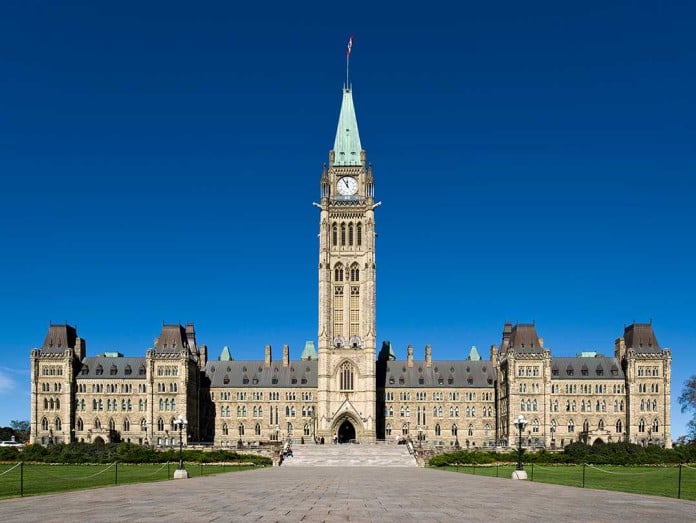 Editors note- The original date provided in story was October 2 and has since been changed to October 19, we apologize for this error and any issues it may have caused.
OTTAWA—Traditional Ecological Knoxwledge (TEK) elders group has announced that they are planning a demonstration at Parliament Hill in Ottawa in October over concerns with aerial spraying. “It has been found that this type of aerial spraying is no good for the environment, land and animals in Quebec so it was banned; so if this is the case, why is it okay for them (Ministry of Natural Resources and Forestry) to do aerial spraying in Ontario?” asked Glen Hare, deputy grand chief of the Union of Ontario Indians, on Monday.

Grand Council Chief Hare noted, “this includes all of Ontario. I know the focus of (TEK) is on the North, but aerial spraying is something that is a concern throughout the province.” He went on to note that the spraying does include areas like Manitoulin Island. “This work used to be labour intensive and done by workers on the ground, but aerial spraying is used now.”

“After two years of trying to get the ear of both provincial and federal governments on it’s concerns with aerial spraying, the TEK elders are getting tired of fooling around,” said Elder Raymond Owl, as reported by Anishinabek News in its September 26 edition. At a recent TEK meeting on September 16, it was decided that they will take their fight to Ottawa’s Parliament Hill with a planned protest on aerial spraying on October 19. All First Nations in the Robinson Huron Treaty (including all First Nations on Manitoulin Island) are being encouraged to attend.

When elders Willie Pine of Mississauga First Nation and Raymond Owl of Sagamok Anishnawbek First Nation held their first TEK elders meeting on August 19, 2014, in Mississauga First Nation, they had one purpose in mind: to put a halt to aerial spraying of the forest with potentially dangerous chemicals such as glyphosate. More than two years later, the elders are still waging their aggressive campaign. The elders’ commitment to this matter is unwavering and enduring. Mr. Owl believes both the provincial and federal governments have breached inherent indigenous rights to consultation on the issue of aerial spraying.

It was noted in the Anishinabek News article, that TEK elders are not alone in this belief. In a letter from Chief Bob Gloade of Millbrook First Nation in Nova Scotia dated September 1, addressed to Environment Minister Glenn Miller, Chief Gloade indicated he was upset and surprised by the government’s approval to allow Northern Pulp and five other companies to spray 2,600 hectares of forest with glyphosate, stated, “we take the position that this (spraying) is a matter for consultation with the Millbrook First Nation.” He went on to say that, “the fact that this kind of spraying has been carried out in parts of the province in the past nine years-spraying of which we had no prior knowledge-cannot be construed as our acquiescence, or acceptance of it.”

Anishinabek News reported that frustrated with lack of response from government, in a letter dated June 4, 2015, TEK elders requested a meeting with Health Canada where participating elders could give oral testimony on their knowledge of the environment. Glyphosate is currently under a re-evaluation by the Pest Management Regulatory Agency (PMRA) to determine its safety to the environment. The re-evaluation process began in 2015 and a decision will be made in March of 2017. According to PMRA guidelines, all decisions made are based on scientific data. The elders are insisting Traditional Ecological Knowledge and oral testimony should be included in the re-evaluation.

In their fight over the past three years, TEK elders have submitted a position paper to Health Canada asserting indigenous science is part of oral traditions as set down in treaty rights and is admissible as evidence in deciding the safety of glyphosate. According to the TEK group, “the courts have affirmed that oral traditions are part of the Treaty relationship that the Crown is legally obligated to honour and uphold. Furthermore, in Delgamuukw (1997) vs. the Crown, the Supreme Court of Canada found that rules of evidence must be adapted so that oral testimonies can be placed on equal footing with other kinds of evidence.”

Following the request that traditional ecological knowledge be accepted in evidence, a follow-up letter from Algoma-Manitoulin-Kapuskasing MP Carol Hughes on behalf of TEK Elders was sent to Minister of Health Jane Philpott on March 24, expressing the elder’s concerns and requesting a meeting between TEK and the PMRA. In a reply from Minister Philpott received by Ms. Hughes Elliot Lake office on July 4, Ms. Philpott stated that the elders concerns “are being carefully considered by PMRA.” However, continuing on to point out that, “the formal consultation period is now closed.” She informed Ms. Hughes that Health Canada would “be pleased to arrange a teleconference with TEK representatives to hear their concerns and explain how TEK’s input will be considered in the scientific review process.”

TEK is planning the demonstration on Parliament Hill on October 19 to protest the spraying of herbicides in traditional territories of the Anishinabek Nation. They say it is clearly a breach of aboriginal rights included in the Robinson-Huron Treaty, in a section stating, “and further to allow the said chiefs and their tribes the full and free privilege to hunt over the territory now ceded by them and to fish in the waters thereof, they have heretofore been in the habit of doing,” has been violated.