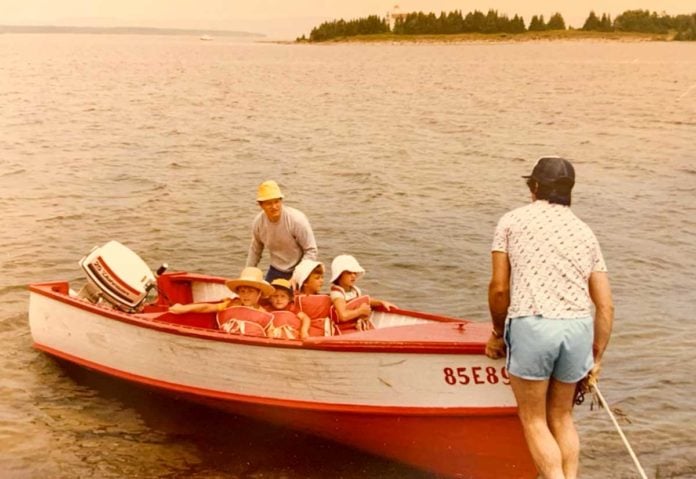 My first memory of Manitoulin is arriving in Dad’s 1972 Copper-coloured Cutlass Supreme, on a July day when the temperature had little regard for the comfort of a five-year-old. As we pulled up to the camp, and I unstuck myself and most of my polyester shorts, from the back seat, I remember the wind. And the waves. Is this the ocean? Are there sharks? Can I go in? No, I was told, no sharks.

I went in anyway.

Which makes sense, because looking at the pictures now, I can still feel the heat of that day. For a few weeks every year, we would fish. We would hike, swim, skip stones. We would eat Farquhar’s and walk the town docks, picking out which of the big boats we would “buy.”

Simple, generic, perfect kind of stuff. The best part, though, is that the end of that trip was just the beginning of the journey.

Dads are not perfect.

That is one of life’s cold, hard, facts, but there is even something perfect about that. Most Dads start out shining knights at the round table, but it’s not until we can see the cracks in their armour that they become real to us. Their foibles will become ours even if we don’t know it yet, and the greatest lessons they teach us are often the mistakes that they don’t want us to see.

A good Dad knows that being a Dad is the ultimate thing in the world. Fatherhood is a beefy stew, of responsibility, privilege, challenges and triumphs, but it is what life is all about. More than a rite of passage, fatherhood it is a life-long transition, an experience that you cannot know without living it. A journey, not a destination. And, even if they don’t always do the right thing at the right time, Dads all want the same two things: to help get you where you’re going, and to share with you where they’ve been.

No two Dads are the same, but there are experiences with which all Dads can relate. Stepping on a stray piece of Lego. Untangling fishing lines in a boat load of eight year olds. Fixing bike chains and putting hockey nets together. They say that the current generation is entitled, but we are all entitled up to a point, and most of the time it was a Dad who fulfilled that expectation without complaint. Like spending four hours on Christmas to assembling a marble mountain, only to see it get knocked down—with glee—on Boxing Day. (Or, having to make five pee stops on the drive to Manitoulin.)

Dads are awesome. Some Dads are strong. Some are smart. Some are both–in fact, until you are a certain age, everyone knows that “my Dad is stronger and smarter than yours and there’s nothing you can do to change my mind!” Every Dad has his own superpower, most of the time driven by love. Like those stories we have all heard about people being able to find the strength to lift a car to save a life–it’s not bicep curls lifting that car, it is love. The realest and most powerful love there is. It doesn’t always come softly, or without swear words, but that is the kind of love that Dads have.

Dads give you things, like ideas, or their old record collections. Sometimes they give you heck when you come home late, and sometimes they give you a wink when they know you should be in trouble, but they’re “gonna let it slide.” A good Dad gives you something to strive for, an example to hold yourself up against. And a good Dad doesn’t give you a hard time when your happiness looks like something different than his.

Some Dads tell good stories that make you laugh, or make you think, or have talents that they’re able to pass along, knowledge that they can share. Some Dads are cautionary tales, too. That’s OK. Nobody’s perfect, especially Dads.

Whether it is your first Father’s Day as a Dad, or it’s your first Father’s Day without your Dad, make sure you celebrate what it means to be a Dad. The good times, the bad jokes and the ugly shirts. Now that I have 15 years of my own experience being a Dad, I’m pretty sure that I can speak for all Dads and say that we’re doing our best to get you where you’re going.

My Dad came to the Island for the first time when he was just a few years old, and like many, he’s been planting roots here since. Those roots have become my roots, and it is the greatest gift my Dad has ever given me.

Father’s Day is here, and while no one has exactly the same journey, we all start at the same place. If you are lucky enough to have a good Dad, that start—the beginning of life—is an open road in a Cutlass Supreme on your way to Manitoulin Island.

*In the nearly five decades since visiting his family’s cottage outside of Little Current, Mike Brock has become a terrible fisherman, a painfully bad campfire guitarist and a shoddy builder of highly dangerous treehouses. In his spare time, he is a TV producer, storyteller and college/university teacher. He has produced hundreds of hours of television and content on all platforms, and this summer will be part of the production team bringing you the Olympics on CBC. In the meantime, though, he’ll be contributing some stories to The Expositor. Mike, his wife, Nat, and two teenage boys—Holden and Bodhi—live in North York during the winter. Check out some of his work at www.urbanpig.tv.

Backyard BioBlitz a fun way to observe nature in your own...