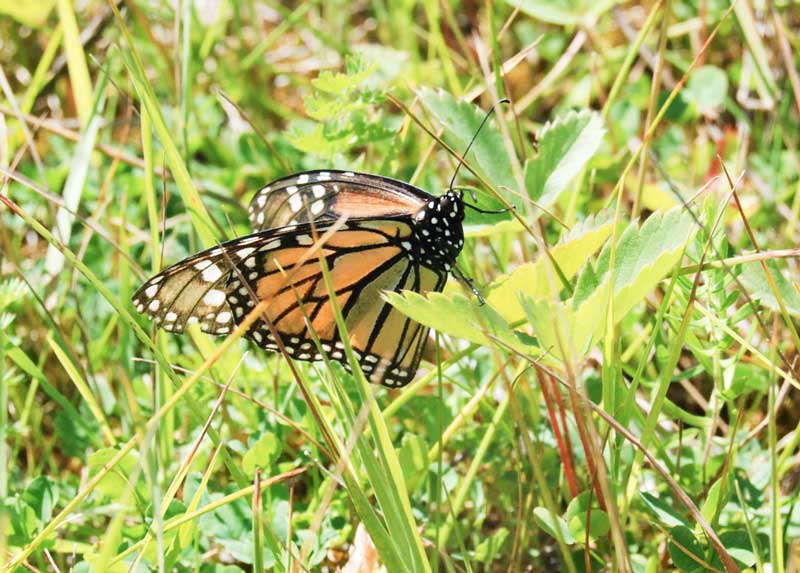 WASHINGTON—The New Year begins with a glimmering of hope for the embattled ranks of the monarch butterfly, the amazing multi-coloured insect whose continent spanning migration epitomizes warm hazy summer days for most North Americans, with the announcement that the US Fish and Wildlife Service is responding to a petition from Center for Biological Diversity, Center for Food Safety, the Xerces Society and renowned monarch scientist Dr. Lincoln Brower by conducting a one-year status review on monarch butterflies as to whether they warrant protection under the US Endangered Species Act.

The situation of the monarch butterfly over the past two decades appears to be dire—the population of the popular insect has declined by over 90 percent in the past 20 years.

Retired Laurentian University professor Dr. Joseph Shorthouse is a familiar sight for many on Manitoulin and The Expositor’s go-to guy for all things entomological and he expressed some guarded satisfaction with the news. “I don’t think it will hurt,” he said. “Especially if it draws attention to changes that are occurring in our environment.”

Dr. Shorthouse compared species such as the monarch as “canaries in the coalmine” when it comes to those changes. “When we don’t know what is causing a decline in a species, it causes us to investigate to discover the cause,” he said. “And if there is more attention being drawn to potential environmental issues the more people aware of those issues, the better.”

“This is an iconic species,” he said. “Everybody loves the monarchs, they look for them to appear in the late spring.”

“The Endangered Species Act is the most powerful tool available to save North America’s monarchs,” said Tierra Curry, a senior scientist at the Center for Biological Diversity in a centre release. “I’m really happy that these amazing butterflies are a step closer to the protection they so desperately need.”

“Our petition is a scientific and legal blueprint for creating the protection that the monarch so direly needs and we are gratified that the agency has now taken this vital first step in a timely fashion,” George Kimbrell, senior attorney for Center for Food Safety, was quoted in the same release. “We will continue to do everything we can to ensure monarchs are protected.”

“We are extremely pleased that the federal agency in charge of protecting our nation’s wildlife has recognized the dire situation of the monarch,” said Sarina Jepsen, the Xerces Society’s endangered species director. “Protection as a threatened species will enable extensive monarch habitat recovery on both public and private lands.”

The centre’s release notes that the butterfly’s dramatic decline is being driven in large part by the widespread planting of genetically engineered crops in the Midwest, where most monarchs are born. The vast majority of genetically engineered crops are made to be resistant to Monsanto’s Roundup herbicide, a potent killer of milkweed, the monarch caterpillar’s only food source. The dramatic surge in Roundup use with Roundup Ready crops has virtually wiped out milkweed plants in the Midwestern corn and soybean fields. Estimates are that the monarch butterflies have lost in excess of 165 million acres of habitat, that is an area about the size of Texas, and which include nearly one-third of their summer breeding grounds.

The monarch population has declined from a recorded high of approximately 1 billion butterflies in the mid-1990s to only 35 million butterflies last winter, the lowest number ever recorded. The overall population shows a steep and statistically significant decline of 90 percent over 20 years. In addition to herbicide use with genetically engineered crops, monarchs are also threatened by global climate change with threats from drought and heat waves, other pesticides, urban sprawl and logging in their Mexican wintering grounds.

Climate change presents a significant threat to the monarchs, as scientists have predicted that the monarch’s entire winter range in Mexico, and large parts of its summer range in the states, could become unsuitable due to the changing temperatures and increased risk of drought, heat waves and other dramatic weather events predicted to increase in coming years.

Despite an expected rebound in this year’s numbers due to favourable weather conditions, the monarch species is still particularly vulnerable as it requires a large population mass to offset losses from severe weather events and predation. The Centre points out that nearly half of the overwintering population in Mexico can be eaten by bird and mammal predators in any single winter and provides the example that a single winter storm in 2002 killed an estimated 500 million monarchs, that translates to 14 times the size of the entire current monarch population.

“It is amazing to realize that when we see a monarch butterfly in the late spring we are looking at the descendant of the great grandparent who set out on the journey here from Mexico,” said Dr. Shorthouse. “Even more amazing is that the butterflies will make their way through generations to a few mountaintops in Mexico, this in an age when with all our technology we are unable to find a missing plane in southeast Asia.”

Manitoulin schoolchildren have stepped up to the front lines in the battle to save the monarch butterflies, creating butterfly gardens and raising the insects sheltered in their classrooms, releasing them to begin the long intergenerational migration back to Mexico each fall.

Dr. Shorthouse expressed hope that despite all the environmental odds stacked against the monarch butterfly, the species will somehow prevail and continue to bring an “aesthetic joy” to those who witness its annual return to Northern Ontario.