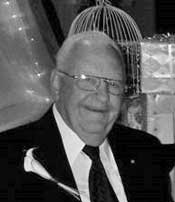 December 26, 1925 – June 15, 2014
In loving memory of Herb Walker, a resident of Gore Bay, who died suddenly on Sunday, June 15, 2014 at his residence at the age of 88 years. He was born in Mills Township, son of the late Clarence and Violet (Irwin) Walker. He had worked as a mechanic, retiring from Island Ford in 1990. Herb had a lot of interests, which included golfing, playing crib at the Seniors’ Centre, and was a member and Past Master of the Gore Bay Masonic Lodge and was the last surviving veteran of the Gore Bay Legion. Herb was a true family man, who loved being with his family. He will be sadly missed, but many memories will be cherished. Herb is survived by his beloved wife Carmen (Buchanan) who he married on July 7, 1949. Loving and loved father of Gwen McDonald (Sandy) of Gore Bay, Lou Addison (Terry) of Gore Bay, Rob Walker (Colleen) of Vancouver, Carrie Cornelson (Lorne) of Toronto, K.C. Walker (Nancy Armstrong) of North Bay, Ronald Walker (Erin) of Parry Sound and Allison Bentley (Wes) of Kagawong. Proud grandfather of Theresa and Richard McDonald (Phaedra) Marc Addison, Jim Walker (Donna), Lindsay and Kirsten (Chris Hanney) Cornelson, Erica Armstrong and Lisa Walker, Kris Walker (Jennifer) and Briana Walker and Sarah Timm (Eric) and Deborah Bentley (Adam Meeker) and great-grandchildren Aidan McDonald, Keira and Liam Walker, Nikson Walker and Ryan Timm. Dear brother of Roger Walker (friend Yvonne), Joan Brooker (late Wes) and Lynda Walker. Predeceased by brothers Floyd, Bill, infant brother Burton and sister Helen Watkins. Also survived by sisters-in-law Bernadette Walker and Gail Walker and many nieces and nephews. Friends may call at Culgin Funeral Home on Wednesday, June 18, 2014 from 2 pm to 4 pm and 7 pm to 9 pm. The funeral service to celebrate Herb’s life will be conducted on Thursday, June 19, 2014 at 11 am with Rev. Jim McKean officiating. Interment in Gordon Cemetery. If so desired, donations (by cheque only) to the Gore Bay Medical or the Seniors’ Drop In Centre would be appreciated. Gore Bay Masonic Lodge will conduct a Memorial Service at the funeral home on Wednesday, June 18, 2014 at 6:30 pm. Online condolences may be left at www.culginfuneralhome.ca. Culgin Funeral Home, Gore Bay, 705-282-2270.