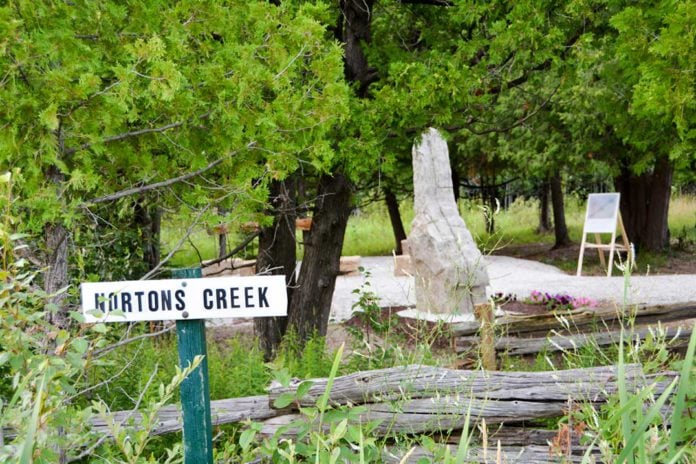 MANITOULIN—The story of tiny Norton’s Creek in Manitoulin Island’s Bidwell area as an important brook trout fishery and now a fish sanctuary is an interesting one that spans nearly a century and celebrates the visions of two men, one American, the other Canadian.

In late July, the family of Robert (Bob) Hutton, his friends and Manitoulin neighbours gathered at a clearing by the side of the Bidwell Road just where Norton’s Creek flows out under the road and on into Lake Manitou.

They were there, with the coordinator, board chair and past chair and many board members of the Manitoulin Streams organization, to unveil a plaque as a permanent testament to the late Bob Hutton’s dedication to conservation and to also dedicate a space on the Hutton property, adjacent to the creek, where school children can come and learn about the life cycle of the brook trout in a unique outdoor classroom.

Mr. Hutton, who passed away in 2013, was an agricultural entrepreneur from the Southwestern Ontario town of St. Mary’s, close to Stratford.

Jean Hutton, Bob Hutton’s widow, told The Expositor that when they were children, she, her sister Leslie Fields (now of Manitowaning) and other family members would come to Manitoulin Island, to the Bidwell area, to stay with their grandparents Mr. and Mrs. Gard Gammage who had a cottage on Lake Manitou.

Later, when Bob and Jean Hutton had their own camp on the lake in the same area, Mr. Hutton became fascinated by the nearby Norton’s Creek, a natural brook trout habitat, which rises from springs in the fractured limestone and flows on down to Lake Manitou, all neatly contained in three 200-acre parcels.

An avid fly fisherman, as was his wife Bertie, according to great-grandson Tim Boland, Mr. Dawes acquired the lands surrounding Norton’s Creek and set out to develop a private trout stream in the 1920s.

Mr. Boland attended the Hutton dedication service and brought with him an original watercolour drawing, done on a copy of the property’s survey document, that indicates the seven timber bridges Mr. Dawes had constructed together with the masonry dam that is still in place adjacent to the outdoor classroom that now houses Mr. Hutton’s memorial. Another dam was located further upstream, the drawing shows.

Other details on the drawing show successful fishermen, cartoon style, landing their catches and a farmer driving cattle along the Bidwell Road. It also notes the stream’s outflow into the lake is a healthy 1,979 gallons per minute. The fall of the creek is 37 feet from its spring-fed source to Lake Manitou, according to the drawing.

Mr. Bolan notes that the family lodge on Lake Manitou still display numerous trophy fish caught not only locally but from around the world and says that, “most of them were caught by my great-grandmother Bertie Dawes.”

The senior Dawes hosted their friends to fishing expeditions on the creek but, after their deaths, the property was kept in the family but not used in this way.

When Mr. Hutton approached Mr. Boland’s mother about purchasing the property and renewing it, Mr. Boland said, the family agreed.

“We felt this was a good use for the property.” And this way, it would be renewed in the late Beman Dawes’ vision and “we could still come and enjoy it,” he added.

Ms. Hutton said that they purchased the stream and its surrounding property in 2008 and got right to work bringing it back to life.

Manitoulin Streams coordinator Seija Deschenes recalled, “In 2008, Bob Hutton came to my office in Manitowaning. He had just purchased the (Norton’s Creek) property and had remembered that, when he was younger and visiting Manitoulin, going there to fish for brook trout.”

“He asked what could be done to bring this stream back as a fishery and brook trout habitat,” she recalled.

By this time, Manitoulin Streams had rehabilitated Bass Creek as a walleye spawning area and sanctuary, had improved the Blue Jay Creek and Manitou River and was also planning work on the Mindemoya River.

Ms. Hutton said that her husband took some courses himself and Ms. Deschenes said that Manitoulin Streams had embraced the project and had involved College Boreal outdoor conservation management students to analyze the stream to determine whether there was any remnant of a brook trout population remaining there.

When they reported that there was no longer any of the species left in the stream, the stream rehabilitation process began almost immediately.

She said the first thing to do was to keep livestock out of Norton’s Creek as areas of the stream had been much widened by cattle wading in to drink there.

The process then moved on to rehabilitate the stream itself by constructing “weeping weirs”, made from rocks, placed strategically in the stream.

Manitoulin Streams board member Delmer Fields of Manitowaning (also a brother-in-law to the late Bob Hutton) collected rocks from fields on his property and brought them to the creek. Conservation Rangers, working with Manitoulin Streams through the Ministry of Natural Resources and Forestry, placed them in the stream to slow down the flow of water.

Dead trees from the area were moved to the edges of the stream and placed there to begin to provide fish habitat and hundreds of trees have been planted by board members and other volunteers along the creek’s banks, on both sides, in an effort to renew the environment to what it would have been when Mr. Dawes purchased it as a healthy brook trout stream.

Ms. Deschenes explained that the next step was to introduce “eyed” brook trout eggs into the stream each year in early December. This activity is often reported in this paper as a photo/essay and involves students from several area schools.

The eggs are harvested from females in Lake Nipigon, fertilized with milt from males from the same lake and then shipped to the Hell’s Lake Hatchery in Englehart where they are raised to the eyed egg stage (the embryos are by now multi-celled and show two black spots that resemble human eyes).

The eyed eggs are shipped down to Norton’s Creek from Englehart and then volunteers work hard to place them in the water in “Scotty Boxes”. The eggs hatch in compartments in these specialized nurseries, affording the fish some protection at their earliest stage.

Ms. Deschenes explained that, when the embryonic fish have absorbed their yolk sacs, they squeeze through a small hole and out into the stream, arriving there with a much better rate of survival.

She explained that 10,000 eyed eggs begin this phase of becoming adult brook trout in the river each year.

Ms. Deschenes said that the Manitoulin Streams group had been working hard with Bob Hutton until his death and continues to work with his family. She noted that much of the preliminary work leading up to the planting of the eyed eggs takes place in Graham Hutton’s large garage building at his cottage.

In her remarks at the dedication of the memorial, Jean Hutton spoke of how her husband’s dream has become a reality, just as Ms. Deschenes explained the process to The Expositor.

“When we decided to create this park, Wes Rydall and Bobby went above and beyond to make it turn out this well,” Ms. Hutton said, referring to the outdoor classroom. “The white pea gravel was trucked in and the stone benches were placed facing the creek so that students could see the dam while listening to their teacher,” Ms. Hutton explained.

“We found the perfect stone for the plaque which can resemble a wolf baying at the moon or, from the side, a polar bear.”

“The plaque itself was carefully selected with the help of Bob’s brother, Murray. Our family has helped with the cutting of trees, planting flowers and erecting the rest of the split rail fencing in the park,” she continued.

Ms. Hutton was enthusiastic about the “beautiful fish carving showing the different stages in the life of a brook trout,” created by Delmer Fields. It is mounted at the front of the outdoor classroom. “The artistry and carpentry skills involved in creating this carving actually took my breath away when I first saw it,” Ms. Hutton said of Mr. Fields’ larger-than-life sculptures.

She went on to thank Delmer Fields on behalf of her family. “It has deeply touched our whole family. We thank him from the bottom of our hearts.”

“Because of this wonderful dedicated team,” Ms. Hutton concluded, “Bob’s vision has become a reality where future generations may learn about and enjoy this gift of nature.”

Ms. Deschenes, attesting to the success of Mr. Hutton’s vision, noted that Manitoulin Streams research confirms that the brook trout are surviving in the stream to become adults, are then reproducing and then the idea is that, over generations, the fish become “stream smart” and as adults move out into the lake, where a brook trout fishery is once again being created, and then return to Norton’s Creek to spawn and reproduce.

Indications are that this is precisely what is happening.

Mr. Dawes’ and Mr. Hutton’s visions vary slightly at this point. Mr. Dawes developed the stream as a place where he and his friends could fly fish. Now, in the Huttons’ hands, it is a fish sanctuary leading to an experience for anglers in Lake Manitou.

To visit the outdoor classroom and Norton’s Creek, travel up or down the Bidwell Road. Watch for the sign indicating the lane to Uncle Steve’s Camp.

The Norton’s Creek outdoor classroom and the Bob Hutton memorial are located in a clearing, by the creek, on the other (east) side of the road from the Uncle Steve’s Camp lane.

And, by the way, Norton’s Creek memorializes a pioneer postmaster who presided over the Bidwell Post Office many years ago when this tiny hamlet was able to boast not only a post office but stores, a school, church, homes and Orange Lodge hall. Jean Hutton sleuthed out the creek’s namesake.