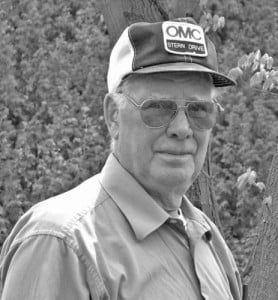 Walter Hawes passed away peacefully with family by his side on Thursday, April 12, 2012 at Collingwood Nursing Home in his 87th year. Beloved husband of the late Margaret (nee McArthur) and the late Blanche (nee Dobson). Loving father of Karen (Doug) Miller and the late Keith Hawes. Cherished grandfather of Anita (Dallas), Angela (Don), Steven (Christine) and Janice, great-grandfather of Stewart, Adam, Jesse, Avery and Rhys. Walter is survived by his sister Winnifred McInnes, predeceased by sisters Evelyn Johnson and Muriel Long. He will be sadly missed by his companion Freda Bond and remembered by Ruth Stubbs. Walter farmed on the 3rd Line of Osprey for many years where he was also involved with the school board and very active in his church. He then moved to Collingwood and worked at Goodyear and it was here that he got to enjoy camping and fishing, which became a favourite pastime. A move to Muskoka led Walter to a new venture as owner of Bass Lake Restaurant, volunteering with the fire department and the local snowmobile club. When an opportunity to relocate to Manitoulin came, Walter made the move and retired to Batman’s Tent and Trailer Park with his daughter. It was here that he met the love of his life and long time companion Freda. Together they enjoyed each other’s company and the ‘Island’ lifestyle. Throughout his life a constant for Walter was his community involvement, his ability to give to others and the love he had for his family and friends. A memorial service took place at Fawcett Funeral Home, Collingwood Chapel, on Saturday, April 14, 2012 at 11 am with visitation one hour prior. In lieu of flowers, donations in memory of Walter may be made to the Parkinson Society. Many thanks are given to Linda and Tony at TLC for their compassion and care. Walter felt so at home with you and for that we are grateful. Friends may visit Walter’s online Book of Memories at www.fawcettfuneralhomes.com.