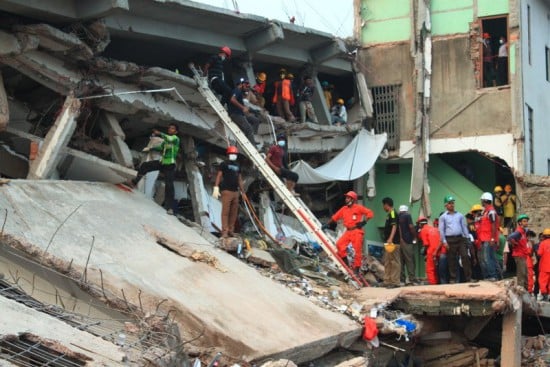 A public building collapsed nearly one year ago in Elliot Lake. There were two fatalities, the community was shocked at the collapse of their shopping centre and the ensuing deaths as well as other injuries and just now a public enquiry is examining every aspect, in detail, of the building’s construction more than 30 years ago and its maintenance since then. These include: problems with the roof parking system that were nearly as old as the structure, changes to the original plan and the whole history of inspections of the structure by both external and municipal authorities among much more.

We know how these things work. Ontario went through a similar process following the e-coli contamination that was allowed to poison the Walkerton municipal water supply that, in turn, led to several fatalities in the community as well as to many citizens there who now live with chronic illness as a result of the faulty water maintenance program.

The current public enquiry at Elliot Lake, the Walkerton public enquiry and the Dudley George enquiry are systemically examining, or have examined, why these various events happened, how they could have been prevented and public recommendations that could be moved into public policy to prevent future similar tragedies, or already have been in the case of earlier enquiries.

The enquiry whose recommendations quickly became public policy was the Walkerton enquiry stemming from its tainted water scandal and as a result of that process, the minimum requirements for water treatment plants large and small have been dramatically upgraded and tightened by law so the public is virtually guaranteed a clean public water supply no matter where they are in Ontario.

That’s the process with which we’re familiar. The process assumes, at root, that no accident is not preventable, that if something went wrong once in a public situation where there should have been community expectations that the processes in place would keep them safe, then it could happen again and so the public enquiry process ferrets out inadequacies in the system that failed and suggests public policy changes to make sure this doesn’t happen again.

That’s how things work in Ontario and in Canada.

A frighteningly parallel situation, differing only in degree but not in kind to the Elliot Lake mall collapse is the collapse of the manufacturing factory last week in Bangladesh where more than 600 people lost their lives.

Because we’re now learning that there has been a history of other such similar tragic events in that country, part of the Indian subcontinent, we can be certain that citizens there do not have the benefit of public enquiries that lead to new legislation designed to prevent recurrences.

It’s easy to be satisfied that our systems works…at least for us.

But as we’ve been correctly reminded over and over since the tragic clothing factory collapse, Bangladesh is one of those countries that produces an enormous amount of the consumer goods (primarily clothing but other products as well) that we happily buy cheaply in Canada.

We are able to buy products made in Bangladesh (and well -made, we would add) inexpensively in our stores because of the low wages paid to the garment workers in that country, the lack of trade unions (which are not officially banned by the government in that faraway country, but are as good as banned there) and the total absence of public processes, such as the public enquiry currently underway in Elliot Lake, that could have prevented this tragedy in Bangladesh, had some process like this been in place as a result of one of the many similar previous mishaps.

So how can we export some of our worker and workplace safety standards for the benefit of the workers who produce the clothing that we are only too pleased to purchase at low cost in our own stores? How do we encourage an Elliot Lake mall-style public enquiry to take place in Bangladesh following this tragedy? How would we ensure that any recommendations, should such an enquiry happen in Bangladesh, were translated into public policy which was then enforced to the benefit of the ordinary workers?

The only answer to all of these questions is the public pressure that must begin with ordinary citizens like all of us, who should demand that the stores from which we purchase goods must warranty that these purchases are ethically produced.

Our federal government has a major role in all of this because it must bring pressure to bear on the Bangladeshi government to have transparent and enforceable worker safety policies whose infractions and subsequent remediation must be reported to an international agency, to which Canada must be a signatory, and it is solely with manufacturing companies complying with these regulations that Canadian companies would be allowed to trade.

If this seems high-handed, we’ve done it before when Canada was among the nations that embargoed South African goods in protest to that country’s apartheid regime.

This approach was not universally popular in Canada as some people felt, on principle, that it was inappropriate to interfere with business while others held that this tactic would deny jobs to already poor, mostly black, South African workers.

Canada entered into this anti-apartheid embargo during another Conservative administration, when Brian Mulroney was Prime Minister.

Controversy aside, the gambit was successful and black citizens of South Africa soon lost the second class designation in their own country and quickly elected a truly representative government with Nelson Mandela, fittingly, as its president.

The garment workers in Bangladesh deserve no less from us; they certainly do not deserve to be held in thrall to the world because we want only cheap goods in our stores.