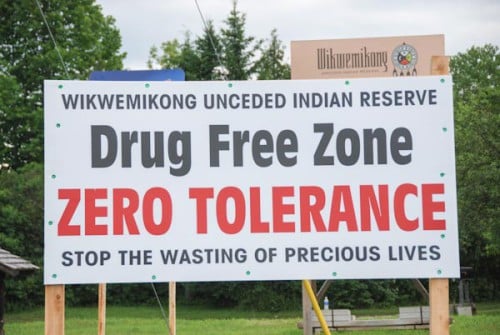 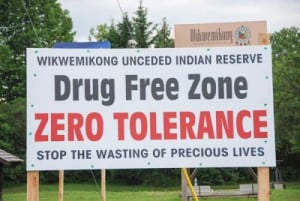 Lead grandmother Marian Peltier contacted The Expositor Monday, sharing that the grandmothers will be staked out at the baseball park until Friday afternoon, when the sacred fire they have once again lit goes out.

“We didn’t feel it was safe at the community’s border, so we moved to the ballpark,” Ms. Peltier explained.

She explained that the grandmothers have decided to remove themselves from the heated political scene in Wikwemikong, following the resignation of Chief Hazel Fox-Recollet almost two weeks ago. Instead, the grandmothers are focussing on making the drug dealers in Wikwemikong aware of their presence and letting them know they are not wanted in the community, she said. The protestors are also pushing for the creation of a neighbourhood watch program, as well as more local support groups being made available for young parents, youth and grandmothers.

“We’re going to sit in on all the bail hearings (of those charged with drug offences), making sure that no one’s there to bail them out,” Ms. Peltier said. “We’ll be keeping an eye on them.”

The petition the grandmothers had started is no longer a priority, she added, reiterating that stronger community programs that support people and focus on positive lifestyles and a neighbourhood watch is now their mandate.

“We can help out and we will participate voluntarily,” she added.

Constable Jamie Peltier, community services officer with the Wikwemikong Tribal Police, acknowledged that he had met with the grandmothers about the possibility of a neighbourhood watch program, noting the success of the program set up several years ago in the Cedar Park area, the subdivision located across the road from the police station on Wikwemikong Way. “It curbed a lot of the problems there,” he said, “and I think it would be successful elsewhere.”

“I think it’s an excellent idea,” the constable added, noting that the Tribal Police would provide support for any community group willing to set up such a venture by way of presentations to the community.

As of press time Monday, the community was still without a chief, but functioning on a leadership level through its council. Council was to meet Monday night.