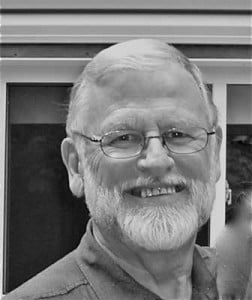 In loving memory of William James “Jim” Doughty, of 167 Holmes Street, Spring Bay, Ontario, who passed away December 26, 2012 after a long and valiant struggle with his illness. Jim was born in New Liskeard, Ontario, son of Whitney and Myrtle (Winters) Doughty, both predeceased. Dearly loved husband of Marilyn (Herbert) Doughty of Spring Bay, Ontario. Loving father of Danny Doughty of Espanola, Laurie (Doughty) Griffin, husband Paul, of Point Roberts, WA, and Kerry (Doughty) VanOort of Azilda. Beloved “Gramps” to seven grandchildren, Steven and Chris Doughty of Sudbury, Lindsay VanOort of Kanata, Katlyne (VanOort) Ghitilescu, husband Bogdan, of Gatineau, PQ, Kristen and Brad Griffin of Point Roberts, and Tiffany Griffin of London U.K. Dear brother of Robert and Hilda Doughty of Campbell River, Shirley (Doughty) Wilson of Selkirk, MB, and Patsy (Doughty) and Ronald Reed of Sudbury. Dear brother-in-law of Sharon Greer of Innisfil. Sadly missed by many nieces and nephews. Jim worked for CP Telecommunications (now AT&T) for 33 years. He also worked as a Marketing Manager for Ratko Pumps and Slingchoker in Sudbury. For much of his life he was an active member of the Pentecostal Church in Sudbury as a Sunday School teacher, choir member, and men’s fellowship president. After retirement he moved to Manitoulin Island where he and his wife spent many wonderful years. The past 17 years they spent their winters in Lakeland, Florida at the Holiness Camp Ground where they formed many lasting friendships. Jim will always be remembered by his friends and family for his honesty, his wonderful sense of humour and his warm, loving hugs…in fact, he was known by many as the “Huggy Guy”. He left a legacy of love for his family, and often expressed thankfulness to God for the years of happiness he enjoyed with his friends and family and his one desire is that each of them have a personal relationship with his Lord and Saviour, Jesus Christ so that he could be united with them again some time in the future. “I have fought the good fight, I have finished the race, I have kept the faith” 2 Tim. 4:7. In lieu of flowers, donations to Christian Ministries Resource Center (Doug Springer), Regional Cancer Program or Spring Bay Pentecostal Church would be appreciated. Rested at the Jackson and Barnard Funeral Home, 233 Larch Street, Sudbury. Friends called after 10:30 am on Monday, December 31, 2012. Funeral Service was in the R.J. Barnard Chapel on Monday, December 31, 2012 at 1 pm. Interment will be held in the Spring in the Grimesthorpe Cemetery, Spring Bay. To light a memorial candle, for donations and messages of condolence www.lougheed.org. Jackson and Barnard Funeral Home, 233 Larch Street, Sudbury, Ontario P3B 1M2. Phone: (705) 673-3611. Fax: (705) 675-1329. jacksons@personainternet.com.