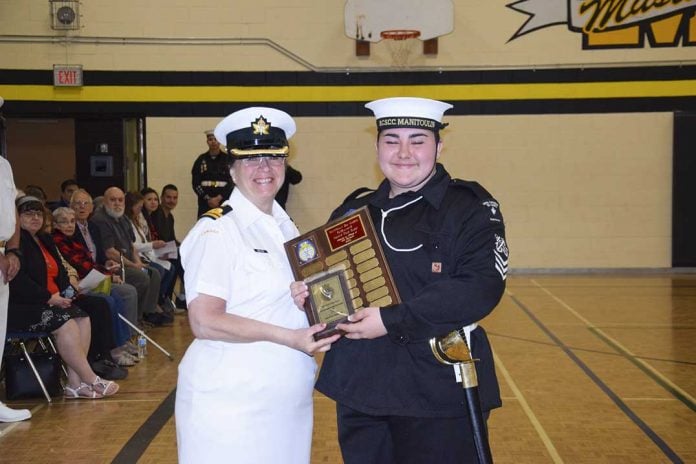 M’CHIGEENG – A rollercoaster of emotions was evident during the 2019 Annual Review of the Royal Canadian Sea Cadet Corps Manitoulin as the corps not only observed the passing of Navy League of Canada (Ontario division) president Barry Bevan but the retirement of the corps’ most senior cadet officer and coxswain, CPO1 Miranda McKay, complete with a ceremonial handing over of sword and whistle.

The 15th annual ceremonial review was emceed by Lt. (N) Maggie King Roi as the corps marched into the Manitoulin Secondary School gymnasium under the watchful gaze of reviewing officer Bernard Andrews and the company reviewing stand.

Mr. Andrews’ CV was recited by Lt. (N) King Roi, noting that he was born in Ayrshire, Scotland in March 1949 and was a member of the Life Boys (later to become the Boys’ Brigade), a similar organization to the Sea Cadets. As a member of the famed Royal National Lifeboat Institution’s Marine Rescue, Mr. Andrews is credited with saving 188 lives during his 25 years of service. Mr. Andrews retired to Canada following a 27-year career in England and Scotland as a landed immigrant and he has regularly officiated at the Manitoulin Sea Cadets’ annual Robbie Burns dinner fundraiser.

The parade order included the national anthem, a moment of silence for Canadian forces, a general salute, inspection march past, cadet drills and displays (including a drill with arms that had been missing in recent years), an awards ceremony and the marching off of the ship’s company.

There were emotional moments as the current coxswain, CPO1 Miranda MacKay passed on her sword and whistle to her successor CPO2 Abbie Harper.

“Again this year, several cadets will be spending part of the summer at various camps,” said Lt. (N) King Roi. “We are excited that there are several cadets heading to HCMS Ontario in Kingston for general training, band and sailing programs. We look forward to seeing all the new skills the cadets learn and share with the rest of the corps.”

Lt. (N) King Roi asked the audience to acknowledge the staff of officers “that work very hard to make this program available to the cadets.”

The Colonel George Bury Memorial Award, exemplifying “fidus amicus” or a true friend, was presented by his daughter Sue Morin and Nick Harper (who just retired from a seven-year cadet career and himself a past recipient of the award) to PO2 Dayna Bouchamp.

The Ed Kift Esprit de Corps is a special award chosen by the cadets themselves. It was presented by Mr. Kift’s widow Judy Kift and their son John to CPO1 Miranda MacKay.

The Legion Medal of Excellence was presented by Comrade Roy Eaton to CPO2 Abbie Harper.

The End of Career Award was presented to two cadets who have aged out this year, CPO1 Miranda MacKay and CPO2 Nick Harper by Lt. (N) Blake and Lt. (N) King Roi. The award comes in the form of End of Career pewter mugs.

Following the pewter mug presentation, a shadow box containing all of the insignia of ranks attained by Miranda MacKay during her career was presented to her.

The ceremony concluded with the new coxswain leading the cadets in a Sunset Ceremony that included the lowering of the flag and playing of ‘Sunset.’ Following the review a reception was held for the cadets and their guests.