KAGAWONG—It’s been a busy and exciting year for board members, program facilitators, volunteers and anyone associated with 4elements Living Arts. Highlights of the past 12 months and plans for 2017 were shared at the annual gathering which includes election of board members.

Outgoing chair Gary Fuhrman led the meeting attended by current, past and nominated board members, along with volunteers, program leaders, staff and partners.

Mr. Fuhrman paid tribute to the outgoing board including long-serving member Joyce Young, who has “contributed a tremendous amount” to 4elements, Pam Jackson, who held office of the Treasurer, and Maja Mielonen, who heads up MICA (Manitoulin Island Cycling Advocates).

Mr. Fuhrman stated it’s been an “inspiration to see what 4e has accomplished through the efforts of Sophie (Edwards) and Patricia (Mader). They have pulled off amazing things. I look forward to passing the torch (of board chair) to someone else.”

Ms. Edwards provided more details of the accomplishments made by herself, Ms. Mader, along with program leader Heather Thoma.

“It was a phenomenally busy year,” stated Ms. Edwards. Grant funding from sources such as the Trillium Foundation made it possible for 4e to have two full time staff, an office administrator (Lorie Graham) and hire two interns.

Ms. Thoma provided an overview of the fun and educational programs for youngsters and adults alike including Elemental Excursions which were trail based and designed for older adults and youth. Outside the Box is brand new and designed to engage new groups such as Community Living based in Mindemoya. These activities include paddling, walking and snowshoeing.

Ms. Thoma is currently putting the details together for an upcoming March break program for kids.

Last year was the second Elemental Festival “which grew four times in size from 2015,” stated Ms. Thoma. The theme was on ‘walking’ and included a walking course, field book project and artwork display in the Chi-Cheemaun ferry.

The most ambitious project to date without a doubt is the $400,000 sculpture installation scheduled to take place this summer just in time for the Canada 150 celebrations in mid-July. Ten finalists were chosen from a field of 40 plus by a jury.

With two board members serving the second of their two-year term namely Mike Sanders and Richard Lathwell, the task of electing up to six members was the last item on the agenda. The following were acclaimed: Susan Snelling, Rebecca Danard, Alissa Price and Jessica Stere.

2017 is the 15th anniversary of 4elements Living Arts. Their studio is located at 91 Main Street in Kagawong. 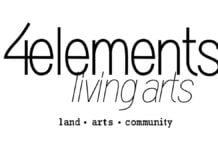