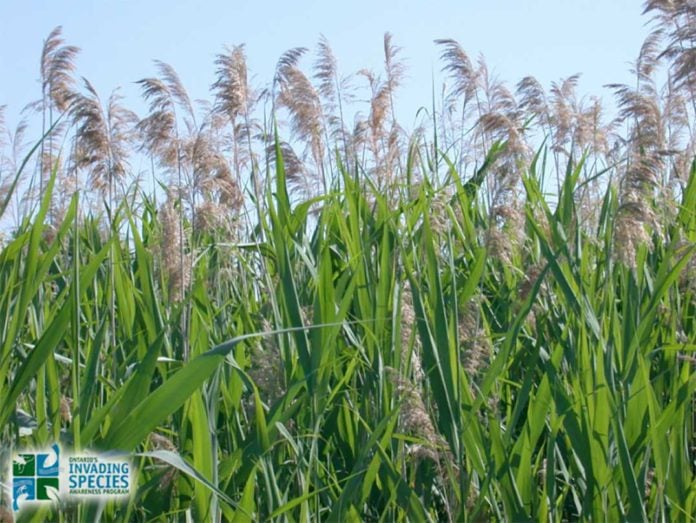 ONTARIO—A member of the Ontario Phragmites Working Group (OPWG) agrees with Ontario’s environmental commissioner that the province is approaching the spread of invasive species like phragmites with a lack of real conviction.

“We let the minister know about the state and issues of phragmites and that there is a lack of a concerted effort to control and get rid of phragmites,” stated Ms. Gilbert. “I was so excited to read in the London Free Press (October 27 edition) that the environmental commissioner said the province’s approach to preventing or slowing the spread of invasive species like phragmites lacks conviction and has been penny-wise and pound foolish.”

“Absolutely it’s a major concern,” stated Ms. Gilbert. “I’ve been trying to get the Ministry of Natural Resources and Forestry (MNRF) to get something started on this problem since 2006. The (OPWG) in 2010 had the MNRF at meetings and nothing has been done.”

She pointed out in cases like that reported in Long Point, the MNRF has allowed for chemical sprays to eradicate and control phragmites in the area. “But this chemical is not being made available to everyone. The MNRF has said it will be five years before this chemical will be widely available. We need, and needed this, in areas like Manitoulin years ago. I am so  upset that no one, the MNRF, MOE or the federal government, is moving ahead on this immediately.”

Ms. Gilbert said, “I had a tour of 140 separate places on the southern end of Georgian Bay where phragmites were found with David Sweetnam. Sixty to 70 percent of the waterfront in the area we toured will be covered with phragmites within the next five years. The National Beausoleil Park is just one large area where nothing is being done to control phragmites.”

“We started a letter writing campaign to National Parks and Wildlife Services as well to get something done, as well as to the pest management regulatory agency to get the chemical needed regulated to control phragmites,” continued Ms. Gilbert. “I can tell you if this plant was threatening agriculture it would have already been solved.”

Ms. Gilbert said the spread of phragmites, “is affecting not only wetlands and waterfronts but the economy as well. If the governments had acted when this problem first arose it would have nipped in the bud—for places like Manitoulin Island phragmites have become a pretty serious problem.”

“Yes, I’m taking my gloves off on this issue because I’m so upset with the response, or lack of response, we have got to this issue, especially from senior MNRF staff and other government agencies,” continued Ms. Gilbert. “We need to get a letter writing campaign to the Monsanto Chemical Company (now Bayer) and the regulating agencies to have their products that are needed to control phragmites available widely like in the US. We need the glyphosate and BSF products to be approved and available to everyone and we need to get government regulatory agencies to approve these products. We need to have mayors, reeves and councils, NGO groups and conservation authorities demanding the same, and for the MNRF to take action on this problem.”

“Phragmites are a big problem in areas like Manitoulin Island all along Lake Huron,” noted Ms. Gilbert. “I’m not waiting another five years for something to be done—no damn way. The Environmental commissioner also said we need to get going on this issue. I want the cavalry to come forward and step to the plate. For instance there has been growth along the side of roads on Manitoulin and local reps have notified the province who indicate they are looking at  solving the problem. Just do it, what’s stopping them?”

“With exceptions, there is little indication that the Ontario government is taking concrete actions to prevent the introduction of invasives, detect them early on in an invasion, or manage and monitor species that are already doing damage,” the environmental commissioner’s report says.

Ms. Saxe said a lot of ecology work Ontario’s Natural Resources Ministry should be managing is instead done by volunteers, often without provincial guidance, expertise, co-ordination, or funding. She said the province has the mandate, knows the need and has the power to do something significant to fight infestations, but hasn’t.