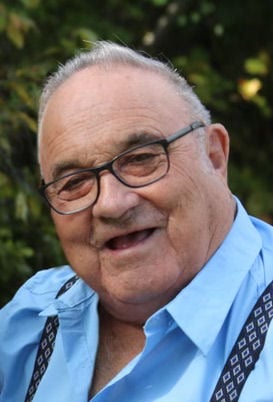 ANDY MAXWELL BOWERMAN
July 12, 1940 – October 12, 2022
It is with great sadness the family of Andy Maxwell Bowerman announce his passing at Manitoulin Health Centre in Little Current, Ontario on October 12, 2022 at the age of 82. Andy was a devoted husband of 56 years to Linda J. Bowerman (nee McCauley). Loving father and father- in-law to Kerry and Angela Bowerman and Peggy and Steve Wood. He was a devoted poppa to four grandchildren and their spouses, Andrew (Amber) Wood, Kurtis (Christine) Bowerman, Zachary (Ashley) Bowerman and Jenna Wood. His three great-grandchildren, Lyla Bowerman, Landon Wood and Maxwell Bowerman, were the twinkle in his eye. Andy’s grandchildren and his great-grandchildren were his pride and joy. He will be reunited with his beloved fur baby Rambo. Andy was born in the Slash at his grandparents’ home. He was raised by his grandparents Albert and Mary Coe. Son of Alvin and Vivian Bowerman (both predeceased). Brother to John Bowerman (predeceased), Paul (Barb) Bowerman and Mary (Jim) Robinson. Andy was son-in-law to Gerald and Elaine McCauley (both predeceased). Brother-in-law to Larry (Dianne) McCauley, Karen (Wayne) Roxburgh, Dale (Carol) McCauley, Sharlene (Jim) Elliott, Cathy (Jim predeceased) Hall and Jack McCauley. He will also be missed by all of his nieces and nephews. Andy worked in construction in his younger years. He moved on to carpentry as his profession which was his passion. He continued in the carpentry business until his retirement. He took great pride in his work. He always had to point out to us while driving around all the houses, cottages and buildings that he built or worked on. Andy spent 21 years as a councillor for Assiginack Township. He was the president of Tehkummah Triangle Seniors’ Club for 11 years. Andy enjoyed deer hunting with the gang. There were many shenanigans through the season especially the annual fowl supper in the Slash. Andy will now be reunited with one of his hunting partners, cousin Ronald Bowerman. Andy always considered Ron to be more a brother than a cousin. In the later years Andy took up moose hunting with his family and extended family. He was excited to shoot his first moose, a 42 inch bull. When asked where did he shoot it, he replied “I hit it exactly where I was aiming.” He always loved to tell his family all the stories about his younger years. There are many stories that we will cherish and keep close to our hearts. Cremation has taken place. There will be a Celebration of Life in July 2023. Anyone wishing to donate in Andy’s memory can be made to Tehkummah Triangle Seniors’ Club, 468 Highway 542A,
Tehkummah, ON, P0P 2C0 or
https://my.charitableimpact.com/charities/tehkummah-triangle-senior-citizens-club or a charity of your choice.