MELDRUM BAY – The annual Meldrum Bay ATV Ride has quickly become a favourite activity for local and even off-Island residents who come from as far away as areas like Elliot Lake and Sault Ste. Marie to take part.

“I belong to the Elliot Lake ATV Club,” 75-year-old Lieber Buceta told the Recorder at the event held this past Saturday. “This is bigger. In Elliot Lake we hold two trail rides a week.”
Mr. Buceta told the Recorder “there is another big ride in Thessalon (this) weekend, but I prefer this one.” He has been attending the Meldrum Bay event for the past three years, noting he doesn’t have property on the Island—he just enjoys taking part in the local ride. “I trailer my ATV down.”

Lee McDonald, one of the main organizers of the annual ride—which has now been held the past six years—told the Recorder, “there were a total of 158 participants in this year’s event. This included 81 ATVs, 35 passengers and 32 helping out or who came for lunch.”

“No, this wasn’t the highest number of entries we’ve had in the event, last year we had 72 and the year before there were 85,” said Mr. McDonald. However, “this year’s total number of participants could be the most people we’ve had take part.”

“We had a really good turnout, especially when you consider there was a predicted 70 percent chance of rainfall. It spit a few times but really not enough to get wet,” continued Mr. McDonald.

“We had a good overall turnout,” said Mr. McDonald, who added, “at the end of the ride we gave out the prizes. There were a lot of prizes to give out; again this year we had a long list of sponsors, 41 in total.” 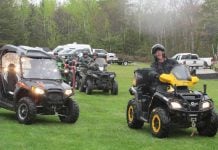 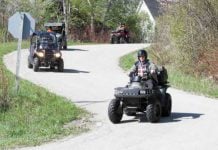