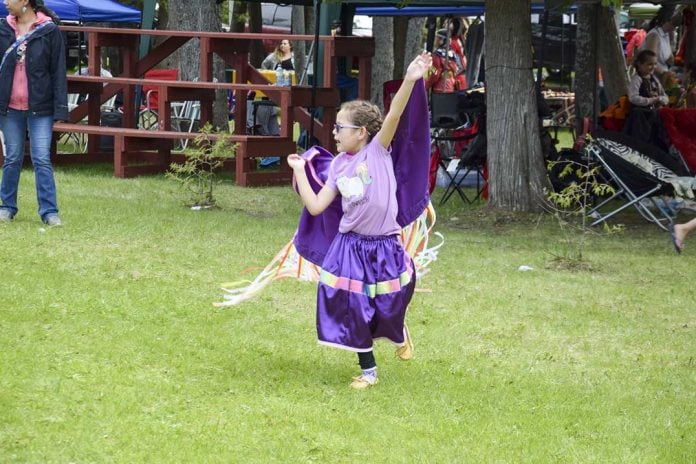 AUNDECK OMNI KANING – Great dancing weather greeted the 29th annual Aundeck Omni Kaning Traditional Powwow this past weekend, probably contributing to the huge crowds that had local vendors scrambling over the two-day event. Being located on the beautiful shores of the North Channel only a mere five minutes west of Little Current on Highway 540 probably helped as well.

The theme of the powwow was Mnaadendan E-Shi-Shaapaaskiiseng (Celebrating Generational Resilience) and the number of young dancers proudly bearing their bright regalia and demonstrating their dance accentuated that theme brilliantly.

Emcee Mista Wasis asked for a big round of applause for former Grand Chief Patrick Madahbee and current Grand Chief Glen Hare, noting their hard work and dedication to their community. Both those august personages were in attendance for the first grand entry of the annual powwow.

“On behalf of the leadership, staff, community and most important, the powwow committee, thank you for coming to our annual powwow,” said Chief Patsy Corbiere.

Chief Corbiere gave special thanks to Mandy McGraw, head of the powwow committee, for her hard work in making the powwow another success, which was made even more difficult this year due to a lack of volunteers. “But everything appears to be A-O-K,” the chief joked.

“The theme this year is ‘celebrating generational resilience’,” Ms. McGraw told the audience. “Moving on and being able to grow. We do have a lot of young dancers here which shows our resilience as a people.”

Following the presentation of the eagle staffs and flags, head veteran Joe Endanawas was introduced.

“Years ago I used to hit every one of the powwows on the Island,” he began.

“I served for the US Army in the 1960s when the Vietnam War was going on,” Mr. Endanawas explained. “Sometimes we fail to acknowledge the younger soldiers—Iraq and Afghanistan etc.—but we bleed the same way.”

The powwow got underway with an intertribal led by the Buffalo Crossing drum. The first spot dance of the powwow was also offered up by this newspaper. 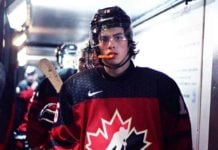 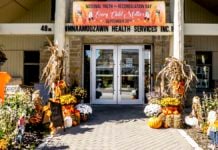