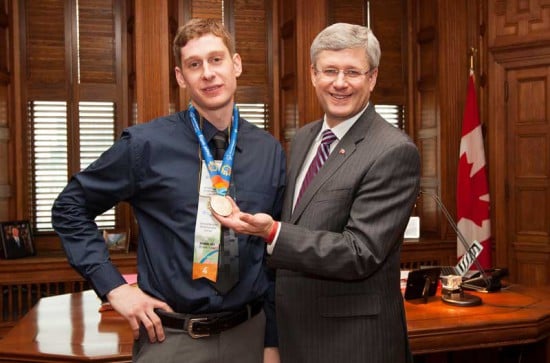 BARRIE ISLAND—A Barrie Island man and his son had the opportunity of a lifetime, meeting Canada’s Prime Minister Stephen Harper while on a trip to Ottawa.

“After meeting with us, the prime minister had to be in Vancouver for a meeting the next day,” stated John Featherstone who, along with his son Austin, had the opportunity to meet and talk with Mr. Harper. “The fact that he had time for us when he was going to have to be in Vancouver the next day was pretty impressive.”

Austin presented Mr. Harper with a Team Canada Special Olympics t-shirt, showed him the medals he won in the Special Olympics World Games in 2012, and talked to him about his family of five, including having five brothers. “He seems to be a very nice man, and I’m very happy to have met him,” said Austin.

On the recent trip to Ottawa, Mr. Featherstone said that he had asked his cousin Pat Davidson, “If she could arrange a tour of the federal Parliament building,” he explained. “We were given the red carpet treatment, including the visit with Mr. Harper. We actually got to go into areas of the Parliament buildings that tourists normally can’t.”

After a Question Period gallery in parliament, the Featherstones were invited to the prime minister’s office, “and were able to stay about 20 minutes. He was asking Austin about what happened and how he did at the World Special Olympic Summer Games and where we live—that type of thing,” said Mr. Featherstone. “At the end of our visit talking to Austin said he should run as a Conservative.”

“It was a lot of fun,” said Mr. Featherstone.