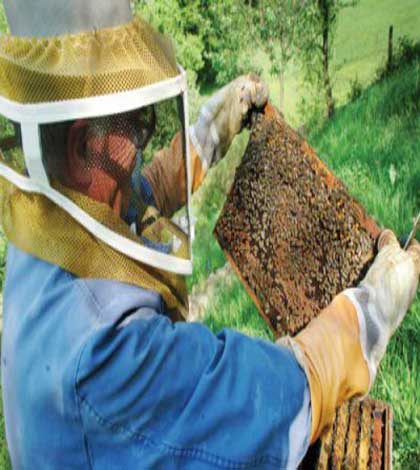 ONTARIO—Beekeepers throughout Ontario and Quebec are calling for a ban on a commonly used pesticide they believe is killing their bees.

“There was a piece on Canada AM this morning talking about this issue,” Kagawong beekeeper Don Lloyd told the Recorder last week. “What happens is that when a certain type of powder is put on seed, and when it gets on plants where bees get pollen it kills the bees.”

In Europe, the use of neonicotinoids has already been suspended, which is almost universally applied to seeds of field crops to control insect pests.

Beekeepers in Ontario and Quebec are saying the long-term significant decrease in bee populations is due to the acute and cumulative effects of the pesticides. Apiarists in both provinces reported experiencing heavy losses of bees in 2012 and this spring as well. They have reported finding dead bees by the handful at the entrances to their hives. Tested for chemicals, many bees were found to have levels of the pesticides in their bodies.

Other bees have simply not returned to their hives, with beekeepers suggesting that they may have lost their ability to navigate their way home.

Bob Dewar, of the Sudbury and District Beekeepers Association (which takes in Manitoulin), told the Recorder, “this is a very serious issue. The good news is that now we are pretty certain we know why bees are dying by the hundreds of millions, but is hard to do battle with the governments when it would also affect big business who want and use these type of pesticides.”

“For beekeepers it is easy for us to see there is a problem and why,” said Mr. Dewar. “The governments need to study this issue further, but it is hard to get them to deal with the big business-companies when they are in bed together.”

“There seems to be a some problems in this (Sudbury) area with the dying off of bees, especially over the past two years, previously in the US and southern Ontario there has been a collapse of bee populations, that we had not seen before then,” he continued. “Our group holds monthly meetings and when you hear of a beekeeper who has been in the business for 30 years and loses 25 of 26 hives, you obviously know something is clearly affecting the bees. Even if you have two, three, or five hives and when you go to your five hives and all the bees are dead in them, it is devastating.”

Mr. Dewar noted, “We are lobbying the governments to do something in regards to this issue, and the Ministry of the Environment (Ontario) seems to be buying into the idea of knowing there is a problem, but it’s the federal government’s help that is required. In the US the environmental protection agency is extremely resistant to do anything.”

Dan Davidson, president of the Ontario Beekeepers Association, said in a statement, “Our industry cannot sustain these losses. Reduced numbers of pollinators also threaten the viability of our local fruit and vegetable supply.”

Ontario and Quebec beekeepers groups are now calling on their agriculture and environment ministers to suspend the use of the pesticide and to do so before the next planting season.

In response to the concerns, the Ontario government is bringing together a group of experts to provide advice on how to prevent bee mortalities. “The creation of this working group is a vital step in our efforts to protect the environment and Ontario’s agrifood sector,” said Kathleen Wynne, premier and minister of agriculture and food. “We look forward to working together to find solutions that will support a thriving, healthy bee population that will in turn support a strong, successful agrifood sector.”

The Bee Health Working Group will be comprised of beekeepers, farmers, agri-business representatives, scientists, and staff from both federal and provincial government agencies. Drawing on a broad range of expertise, the working group will provide recommendations on how to mitigate the potential risk to honey bees from exposure to neonicotinoid—a pesticide used for corn and soybeans.

The working group will meet for the first time this month and provide its recommendations by the spring of 2014.