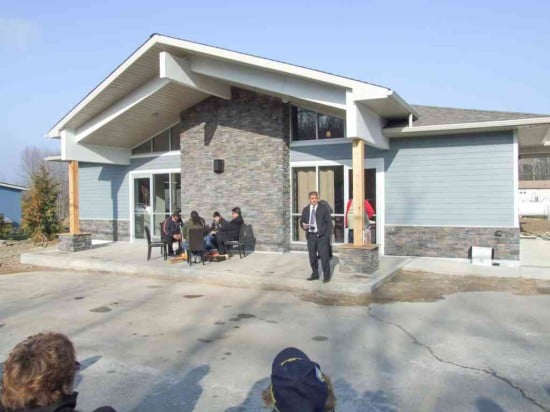 BIRCH ISLAND––The Whitefish River First Nation Seven Fires Youth and Elders’ Centre grand opening attracted a significant crowd of well-wishers recently as the ribbon was cut for the building located on the grounds of the former band office.

Master of ceremonies Dennis McGregor referenced his mother’s recent start on her spirit journey during his opening remarks. “She always talked of an elders’ lodge,” he said. The need for a place for elders and youth to gather has often been discussed in the community.

Elder George Francis delivered the invocation in Anishinaabemowin, following up with words in English. “It is going to take all of us to help the youth, all of us!” said Mr. Francis to loud applause.

Mr. Francis recalled his own volunteer efforts with 13 youth on a hockey team. “I would come home from work in Sudbury and they would all pile in. I did it all myself in those days,” he said. “When I see moms and dads dropping their kids off at the arena, maybe tying their skates, they think they are doing a big thing. No! It is going to take a lot more than that.”

Carson Pitawanakwat, one of the community’s youth, assisted Mr. Francis in his duties, taking the smudge around through the crowd and then performing a ceremonial cleansing of the building.

Singer Craig Abotossaway explained that the opening song by the community drum group would sing the words, “Dancing the Spirits in, dancing the spirits in, in the daytime,” keeping with the spirit of the event.

“My message today is about paying it forward,” said Chief Shining Turtle. “We need to continue to set positive goals. Individual goals and community goals to improve the community, for the youth, for the elders and for all of us.”

Chief Shining Turtle noted that the Whitefish River First Nation community is surrounded by incredible natural beauty and contains within the beauty of community volunteers––volunteers such as an elder who comes out to tie the skates of 13 hockey players, who makes 13 sandwiches. “Be kind, be more loving, feel the sun,” he said.

“What does the future look like?” asked Chief Shining Turtle? “Statistics show that we are a young community. Our youth need our support and our guidance.”

The chief exhorted his community members to come forward and volunteer in the community. He referenced a recent event by the community’s firefighters where $1,800 was raised in one hour for Movember. (The chief himself has challenged the community to raise $10,000 in the effort by agreeing to shave his head when the goal was met. The amount raised is closing in on the mark.)

Youth representative Crystal Clark McGregor thanked the community for their efforts in a short speech. Elder representative Marion McGregor joked that her speech would be a little longer. “Today marks another chapter in our path of life,” she said.

Some of the major contributors to the project were acknowledged with plaques that will hang in the centre, including the Whitefish River First Nation Diner’s Club, Lily Fielding and David Nawehgahbow.

The cost of the facility was in excess of $400,000, raised through donations, community fundraising and events without any input from upper levels of government. “You might be wondering why you don’t see any of our MPs or MPPs here,” joked Mr. McGregor. “They didn’t contribute a dime.”

Architect Chris Perry watched from the crowd as people processed in. “The community told us they wanted a very friendly space,” he said. “So we designed it around a very large kitchen space and a comfortable living room to give it a homey feel.”

There was general agreement from those attending the feast that the goal was very well met.

The community drum sang a special Thunderbird song, which Mr. Abotossaway explained was an invitation to the Thunderbird to come into the house. The attending community members processed in a line into the feast within to the drumbeat of the song, which continued pushups (repetitions of rounds of the song) until everyone had entered.