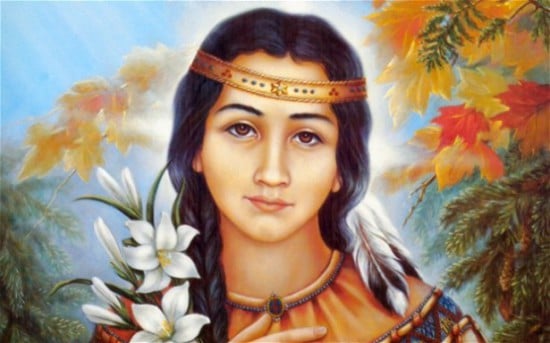 ROME––In a solemn ceremony held before 80,000 members of the Roman Catholic faithful gathered in St. Peter’s Square in Rome, including several worshippers from Manitoulin and an estimated 15,000 from Canada’s Aboriginal communities, Kateri Tekakwitha has finally received her due becoming North America’s first Indigenous saint. On Sunday October 21, Pope Benedict XVI presided over the canonization of St. Kateri, known among Anishinaabe Catholics as The Flower of the Algonquins and among the Six Nations as the Lily of the Mohawks.

“Today was a glorious sunny day, 20 degrees,” reported Dianne Musgrove of Birch Island who attended the ceremony. “The canonization ceremony was almost three hours long. St. Peter’s Square was packed, but I got a seat 15 rows from the front, so I had perfect view of the megatron screen and speakers!”

Ms. Musgrove said that she took a picture of Cardinal Thomas Collins and Ron Boyer, a deacon who performed a smudge ceremony at the mass and a young boy named Jake Finkbonner, whose recovery from a flesh-eating disease was attributed to St. Kateri and formed the basis of the second miracle required for elevation to the sainthood.

Pope Pius XII recognized the first miracle, St. Kateri’s recovery from her smallpox disfigurement, as an authentic miracle in 1943.

“It was really something, a beautiful thing,” said Donna Bruder of M’Chigeeng, who along with a large group of Island Catholics attended a mass at the Martyr’s Shrine in Midland. Highlights from the mass in Rome were shown on a large screen at the outdoor mass at the shrine.

Gerry Closs of Sheguindah worked as superintendant of education on Manitoulin with responsibility for First Nations schools in the early 1970s.

He recalled that the Wikwemikong Junior School had been previously call the Kateri Tekakwitha School in honour of the new saint. “The principal of the school at that time was a nun,” Mr. Closs told The Expositor.

At some point during his time working for the Department of Indian Affairs on Manitoulin as an education supervisor, Mr. Closs said the Wikwemikong Band Council and its education department decided to re-name the school the Wikwemikong Junior School.

“There was quite a large painting, a reproduction I think, of Kateri Tekakwitha that hung in the entrance foyer of the school and when the name change happened, I suggested to then principal (the late) Sarah Peltier that the painting was no longer relevant. She agreed and it was taken down and the custodial staff at the time packed it away for storage. It may well be still stored somewhere at the school or elsewhere in Wikwemikong,” the retired educator mused.

St. Kateri was born in upstate New York in 1656 to a Mohawk father and an Algonquin mother. She lived a hard life, terribly scarred and nearly blinded by smallpox, a disease that left her an orphan after killing both her parents and brother.

St. Kateri’s mother Tagaskouita was baptized in Quebec before being captured by a Mohawk war chief and carried off to New York. Tagaskouita eventually married her captor but never gave up her Catholic faith, passing it onto her daughter before her death.

St. Kateri was a virgin, remaining chaste for all of her short life. A decision that led to an estrangement from the uncle, another war chief, who adopted her following her parents’ death, and her banishment from her home community.

St. Kateri fled to a Catholic Native village near Montreal, where she was baptized at age 20. She only lived another four years, dying at age 24. Upon St. Kateri’s death, her legend truly began. Local French voyageurs described how following her death, her horribly scarred visage cleared and she became beautiful.

It would take another 350 years before confirmed miracles would start her upon the road to sainthood.

Pope Benedict gave communion to Jake Finkbonner, a 12-year-old boy from Washington whose cure from a deadly flesh-eating disease was the second miracle attributed to the saint. Two authenticated miracles are required for canonization.

“May her example help us to live where we are, loving Jesus without denying who we are,” Pope Benedict said during the ceremony. “Saint Kateri, protectress of Canada and the first Native American saint, we entrust you to the renewal of the faith in the first nations and in all of North America.”

“The canonization of Saint Kateri is a great honour and joyous occasion for the many North Americans and Aboriginal peoples who cherish her witness of faith and strength of character,” said Prime Minister Stephen Harper. “The Government of Canada stands with those who are celebrating her life on this day in Canada, the United States and throughout the world.”