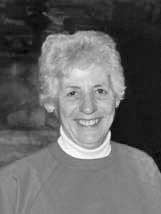 In loving memory of Celia Patterson, a resident of Gore Bay, who died at Health Sciences North, Sudbury on Friday, September 14, 2012 at the age of 84 years. She was born in St. Peter’s, Nova Scotia, daughter of the late Leo and Irene Sampson. Celia had worked as a clerk at the Co-Op and at Manitoulin Transport. She and Goff had been the first managers at Manitoulin Island Country Club, having been on site from the beginning and for a number of years after the opening. Celia also ran a bed and breakfast for a number of years. She enjoyed partridge hunting, and especially curling and the bonspiels she attended with her many friends, and playing cards (especially Texas Holdem). She was also an avid golfer. She will be sadly missed by her loving family and friends, but many memories will be cherished. Celia is survived by her loving and beloved husband Godfrey. Loved and loving mother of Errol and Penny Patterson of Blind River, Dave and Bonnie Patterson of Gore Bay, Doug and Irene Patterson of Peterborough, Jack Patterson of Tottenham and Perry Patterson and partner Todd Bolivar of Gore Bay. Predeceased by an infant daughter. Proud grandmother of eight grandchildren and two great-grandchildren. Dear sister of Agnes Campbell, Amedaee and Carol Sampson, Cyril and Kay Sampson, Dan and Bertha Sampson and David and Eula Sampson and John Sampson all of Nova Scotia. Predeceased by sisters Rita Landry and Kay VanHorn and brothers Stanley, Edwin, David, and Oswald Sampson. Also survived by many nieces and nephews. Friends called at the Culgin Funeral Home from 12 noon to 1 pm on Tuesday, September 18, 2012. The funeral service to celebrate Celia’s life was conducted in the Wm. G. Turner Chapel at 1 pm with Mr. Lyle Dewar officiating. Cremation will take place with interment in Providence Bay Cemetery. If so desired, donations to the Gore Bay medical Centre or the charity of your choice would be appreciated. Online condolences may be left at www.culginfuneralhome.ca. Culgin Funeral Home, Gore Bay, 705-282-2270.