LITTLE CURRENT—The Anchor Inn Hotel in Little Current has long enjoyed a reputation as a meeting place for boaters plying the waters of Georgian Bay and the North Channel, but on July 4 the main bar was packed to the gunnels with happily chatting sailors who had come to celebrate the 10th anniversary of the first broadcast of the popular VHF radio newscast serving boaters in the region.

They had also come to fete the man who made it all possible, the redoubtable Roy Eaton of Little Current, whose voice travelling the airwaves at 9 am each morning throughout the summer has been a familiar beacon to the region.

The Cruisers’ Net, for the uninitiated, is a VHF radio broadcast emanating from the upstairs meeting room of the Anchor Inn Hotel wherein local boaters call in and announce their presence in local waters and keep in touch with each other, receive important local weather and water conditions and, sometimes, critical contacts from family members at home in times of emergency.

In typical fashion, Mr. Eaton used the occasion to hop upon a chair and deliver thanks to others who have made the Cruisers’ Net possible. Critically and among the foremost were the Anchor Inn proprietors, Bruce and Kelly O’Hare and Rob Norris, who provide the facilities and infrastructure for the Cruisers’ Net. “It is no exaggeration when I say that the Cruisers’ Net would not be possible without their support,” said Mr. Eaton. “They were instrumental in helping make it a reality and they have continued to provide support down through the years.”

Mr. Eaton also had high praise for the support of the Little Current Yacht Club and its members, particularly Margaret Van Camp, who often steps in to fill the airwaves when Mr. Eaton’s voice can’t make it to the microphone.

Northeast Town Mayor Al MacNevin was presented with a plaque thanking the community for their support, and deftly turned tables on Mr. Eaton by presenting a plaque of gratitude from the town for his many years of service to the community and congratulating the Cruisers’ Net on the occasion of its milestone anniversary.

Mr. Eaton thanked the Northeast Town for their help with the holding of the past five years of Cruisers’ Net rendezvous and financial support of Mr. Eaton’s seminars on boating in the North Channel at the annual Toronto Boat Show.

The Cruisers’ Net host also thanked the North Channel Marine Tourism Council and director Marg Hague for the innovative marketing program instituted by the Cruisers’ Net whereby a sturdy unbleached cotton boat bag filled with brochures containing information about the various communities and businesses along the North Shore are given out as prizes to the first callers to the radio program each morning. As a bonus to the event, there was one of the popular bags awaiting each boater at the event.

Among the individuals honoured with one of Mr. Eaton’s many plaques were Debby and Jib Turner. “Whenever we need anything, prizes or whatever, I just have to mention it to one of them at Turners’ of Little Current and it appears,” he said.

Mr. Eaton thanked Sandy and Dave Naples and Marilyn and John Lucy, who he said had done broadcasts and “this winter looked after our Cruisers’ Net rendezvous in Punta Gorda, Florida.” Gail and Doug Gates, Shirley and Tom Geggie (absent) have also done broadcasts and Ms. Geggie created two volumes of pictures of boaters visiting the Net over a four-year period and finally, Mr. Eaton acknowledged the work of Jim Corless commodore of the Little Current Yacht Club over the past four years.

The LCYC in its turn thanked Mr. Eaton for his work, with board member Rod MacLeod presenting Mr. Eaton with a plaque commemorating the occasion.

Following the kind words and accolades, including a standing ovation for Mr. Eaton himself, a tasty cake was divvied out to those attending and a great afternoon of fellowship ensued. 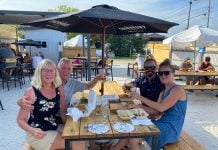 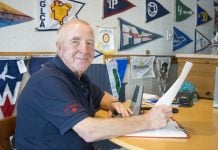 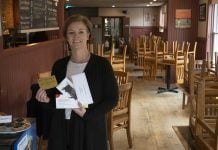 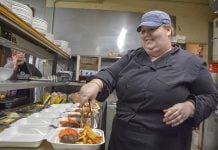 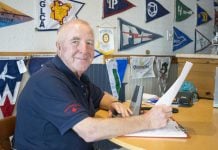