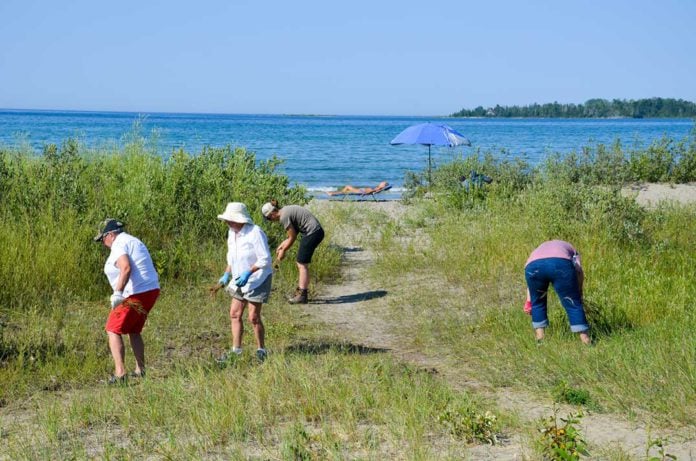 Work permit will last for 25 years

PROVIDENCE BAY—Central Manitoulin has received some good news in the form of an approval permit to carry out work on the Providence Bay beach area, balancing protection of Pitcher’s Thistle and providing for recreational use.

“It is really good news,” stated Alex Baran, a Central Manitoulin councillor and resident of Providence Bay, of a permit approval notice provided to the municipality by the Ministry of Natural Resources and Forestry (MNRF) to carry out work and a management plan for the entire beach and boardwalk area.

“We have a budget in place for this work and we had been expecting this decision because we had our draft management plan approved by the ministry previously,” said Councillor Baran, “but this is still very good news that we have been granted the permit.”

What the MNRF announcement means is that work will be able to take place. “There will be less vegetation in areas on the beach where summer visitors want to spend recreational time, while at the same time having protections in place for Pitcher’s Thistle,” said Councillor Baran.

Notice of the MNRF decision was provided on September 22. The municipality had submitted a proposal in relation to an overall benefit permit under clause 17(2)(c) with respect to Pitcher’s Thistle in order to conduct beach and boardwalk maintenance activities in Lot 1, Concession 11 and Lot 2, Concession 12 geographic Township of Carnarvon, Providence Bay, Manitoulin Island.

The municipality had to provide many reasonable alternatives that would not adversely affect the species. In its decision the MNRF noted, “the best alternative, which was adopted, consists of removing moderate amounts of woody and non-native vegetation and creating an appropriate level of sand disturbance in the habitat that it is consistent with maintaining the functionality of the habitat. The permit also requires the municipality to undergo a number of measures to minimize adverse effects on individual members of Pitcher’s Thistle.”

With the permit the municipality will now be able to take steps to remove the Phragmites that have plagued the beach for a number of years, following up on the removal of white sweet clover on the beach that was done as part of the beach clean up this summer.

The granted permit is for a 25-year period, which means the municipality will not have to go back to the MNRF on a yearly basis to carry out any activities on the beach and boardwalk area.

“This work will allow the municipality to provide the traditional feel and look for the beach of Providence Bay that visitors and locals have been asking for,” said Councillor Baran. “It will be a huge benefit for our beach and the community.”