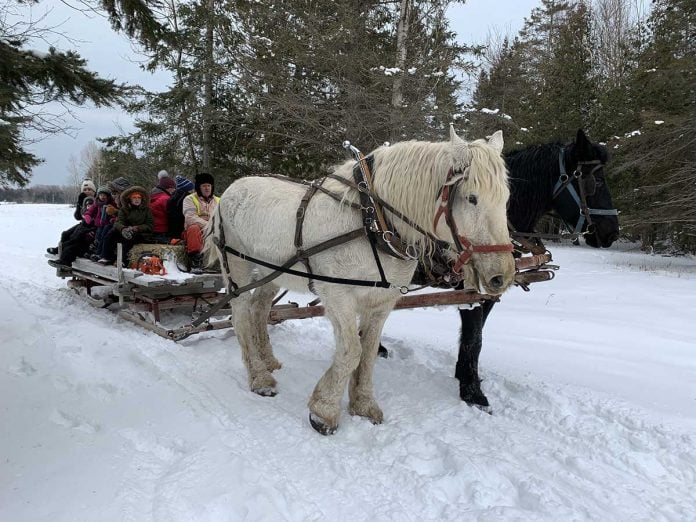 PROVIDENCE BAY – While taking visitors by horse and sleigh for a ride on his property is a long-time tradition for the Lyle Dewar family in Providence Bay, the recent Central Manitoulin Lions horse and sleigh adventure was a huge success in the first running of the event which helped to benefit the Manitoulin Island Food Bank.

“Lyle Dewar and his Percheron horse team named Mac and Queen pulled the sleigh over rolling fields, past cedar rail fences and through the snow-covered forest, all the while his blind dog Dino led the way during the thirty-minute adventure,” said Mr. Mohr. “Lions Dale, Allison, Sarah and myself hosted and organized the groups of 12 as they came for their sleigh ride adventures.”

“It went really well,” said Dale Scott, vice-president of the Lions Club. “This was the first family sleigh ride the Lions Club has held, and for $5 participants had the opportunity to take a sleigh ride with Lyle (Dewar) and his horse team, and afterward enjoy all the hot dogs and hot chocolate they wanted.”

Mr. Dewar told the Recorder, “we have been hosting horse sleigh rides for 52 years now. We had 57 people take part yesterday. We even had some people that came out earlier in the morning and we took them for a sleigh ride, and they donated $50 to the Lions Club for the food bank.”

“Last year we couldn’t hold the rides because the snow was so deep the horses would bog down in the snow and couldn’t get through,” said Mr. Dewar. “For years we used to hold sleigh rides for residents of the Hope Farm.”

Mr. Dewar’s son Darren helped out. “I have awfully big horses and he helped get them set up. And Sharon got the hot water boiling and set things up in our garage so the Lions could make the hot dogs and hot chocolate for all the participants.”

“Lyle (Dewar) was such a gracious host, allowing us to use his cozy garage to get warm, make hot chocolate and hot dogs,” said Mr. Mohr. He added, “in the end we raised $360 in two hours for the local food bank.”

Mr. Scott noted the Lions Club is hoping to hold the event again in 2021.