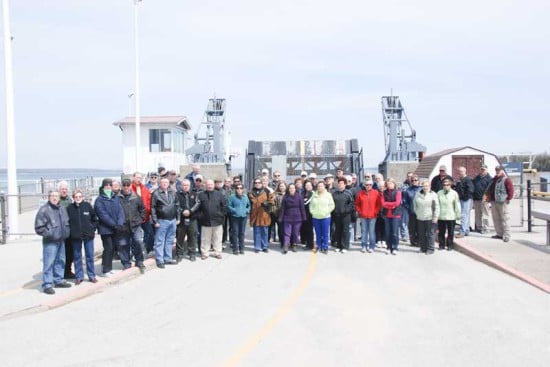 OWEN SOUND—It is official. The MS Chi-Cheemaun, Manitoulin Island’s vital ferry link to Tobermory at the tip of the Bruce Peninsula, will not be starting its 2013 schedule this Friday, May 3.

The Owen Sound Transportation Company, the Chi-Cheemaun’s operator, announced on Monday, April 29 that due to continued low water levels on Lake Huron the May 3 start to the ferry season has been postponed until at least Friday, May 10.

[box font=”play” fontsize=”14″ float=”left” head=”Have your say!”][polldaddy poll=7078352][/box]The release notes that although water levels have slowly increased over the last week, those levels remain below the minimum level required for the ferry to safely operate from the existing dock fenders at Tobermory and South Baymouth.

The fenders are designed to protect the ship by cushioning it from the docks. Estimates to make the repairs/renovations to the docks has been estimated at between $270,000 and $300,000, but the owner of the docks is Transport Canada.

On May 2, 2013, the OSTC will proceed with its annual spring repositioning cruise event. According to the release, water levels have risen sufficiently to permit safe docking of the vessel in its light condition with passengers only. Previous alternate plans had envisioned a round-trip cruise, but with the ability to dock in Tobermory having been determined, passengers will instead disembark in Tobermory as is the custom; travelling back to Owen Sound by bus. That event is currently sold out.

The same OSTC release reiterates that the ferry docks are owned by Transport Canada.

Transport Canada Communications Advisor Silvia Di Tiero released a statement on Monday regarding the ferry docks. “Transport Canada recognizes the role that the Chi-Cheemaun ferry plays in serving communities and providing a transportation link. The department is aware that water levels are currently at a significantly lower level across the entire Great Lakes system. Transport Canada is in discussions with the Government of Ontario and the Owen Sound Transportation Company to explore options to address the impacts of low water levels on the docking of the Chi-Cheemaun ferry.”

“Federal Port Facilities in Tobermory and South Baymouth need maintenance and the harbour for the Manitoulin terminal needs to be dredged so the Chi-Cheemaun ferry can carry 36,000 passengers and their cars this May and June,” said Algoma-Manitoulin-Kapskasing MP Carol Hughes, rising to speak on the matter in the House. “The cost for repairs is less than $300,000. The cost to tourism without a ferry is unimaginable.”

Actually, the costs associated with the ferry’s impact on the Island’s economy have been estimated at more than $38 million according to sources who cite an as-yet unreleased economic impact study recently completed on behalf of the OSTC. The costs cited in an assessment prepared for Transport Canada in 2012 indicated the cost of repairs would be in the $280,000 range, according to some sources in a position to know.

“I am frankly disappointed that this government that says their vision is all about jobs and the economy is allowing this issue to impact jobs,” said Ms. Carol Hughes. “This is quite problematic for me.” The NDP MP who represents Manitoulin Island and most of the North Shore within her riding noted that the impact stretches far beyond the Island’s shores and across the entire North.

“This isn’t something new,” said Ms. Hughes. “This is an issue that has been brewing for some time.” She cited both the current government and that of the previously governing Liberals as having dragged their feet on conducting the necessary adjustments.

“This isn’t something new,” said Ms. Hughes. “This is an issue that has been brewing for some time.” She cited both the current government and that of the previously governing Liberals as having dragged their feet on conducting the necessary adjustments.

Fitz Marine consultant Dave Ham noted that Fitz Marine had in fact conducted the last adjustment to the fenders some eight to 10 years ago during the Liberal reign. “They have the equipment and the expertise right here,” said Mr. Ham. “They were contracted by the company who was supposed to do it back then. They couldn’t do it so they hired Fitz Marine to do it. All anyone needs to do to fix this is pick up the phone and call.”

Not impressed with any suggestion that the repairs would have to go through a tendering process, Ms. Hughes reiterated her position. “This is about jobs and the economy during a very fragile period in our region,” she said. “This needs to be dealt with quickly, before any more damage is done. This isn’t a lot of money when you compare it to the impact that this will have on small businesses, First Nations and communities in the North.”

On the other side of the ferry route, Bruce-Grey-Owen Sound Conservative MP Larry Miller has been raising the alarm about the ferry recently, feeding rumours that the ferry delay is actually a plot by the OSTC to bump up its bottom line by delaying the ferry operations during a low volume period. “I think the delay is something they have been planning to do,” he said. “Water levels are low, and I get the safety issue, I really do, but the ferry was operating at these water levels last fall.” Mr. Miller suggested that the current water levels may even be above those experienced in the late fall.

“There were some issues in rough winds, as I understand it,” he said.

Although he suggests the OSTC has a vested interest in the delay, Mr. Miller does not let his government’s agency, Transport Canada, off the hook. Asked if he feels that agency bears some responsibility, the outspoken MP was succinct: “I sure as hell do,” he said. “It has to be dealt with too.”

The MP blamed a civil servant at Transport Canada (who he named) as the bottleneck in getting the work done on the fenders at the docks. “The concern never went beyond that point, the minister did not hear about this issue until two months ago,” he said. “She never passed the concerns on to me. Believe me, if I had known about this last July, we would not be having this conversation now.” Mr. Miller said the first he learned of the issue was from the Canadian Ferry Operators.

Ms. Hughes bristled at the suggestion that the delay was the fault of a bureaucratic communication glitch. “I think that to slough off responsibility onto everybody but themselves has been the response of this government for too long,” she said. “It is time that they step up to the plate for the people that depend upon this service for their livelihood and get this issue resolved.”

Mr. Miller does not cite any firm evidence for his claims the OSTC harbours a hidden agenda in delaying the start of the season, but lays out his rationale for making the assertion. “When the boat is running with part loads, it still costs the same amount,” he said. “If they don’t run the ferry, they save money.”

“When the boat is running with part loads, it still costs the same amount,” he said. “If they don’t run the ferry, they save money.”

Mr. Miller said there appeared to him to be a ‘pissing match’ between Transport Canada and the province over the ferry docks. He noted that divestiture plans first formulated almost a quarter of a century ago are still in discussion. The MP suggested that the divestiture transfer revolves in part around funds for maintenance and repairs of the facilities going forward into the future, including the work needed on fenders.

OSTC President and CEO Susan Schrempf refuted Mr. Miller’s assertions regarding any motivation to reduce the ferry schedule. “He is entitled to speak to whatever he likes,” she said. But on the subject of whether it is in the financial interests of the OSTC to reduce the season, Ms. Schrempf had a succinct answer. “No.”

The longer version that Ms. Schrempf followed up with lays out a simple but compelling rationale. “The delayed start of the ferry season will not result in any cost savings for the ferry operation or the OSTC,” she said. “We are a subsidized ferry service, we lose money all the time. We need every dollar that we make. The revenue from the cancelled runs far outstrips the expenses.”

As to communicating the company’s operational woes to local politicians, Ms. Schrempf pointed out the fundamental problem inherent in Mr. Miller’s argument. “We are an agency of the provincial government,” she noted. “We report our operational issues to our owner, the Province of Ontario. That does not include MPs, MPPs or any other local politician. If an MP or MPP calls me with a question, I can respond,” she said.

Although Ms. Schrempf did not say it, any student of Canadian political government would suggest that a Crown agency executive that sought out MPs or MPPs or even local mayors and reeves for support or lobbying on that agencies’ behalf on an operational issue would most likely be seeking other employment in relatively short order.

As to the fenders themselves, the matter is not one that can simply be alleviated by lowering the fenders. “They are as low as they can go with the existing structure,” said Ms. Schrempf. The fenders require significant investment to be modified, perhaps even requiring complete replacement.

As to the cost, while Ms. Schrempf did admit to being in possession of the Transport Canada survey, but since it is not an OSTC document, she could neither deny nor confirm the cost estimates being cited by other parties.

A rally is being proposed to meet the first arrival of the Chi-Cheemaun in Tobermory, as well as a rally for this Friday, May 3 at the South Baymouth ferry dock in protest of Transport Canada’s lack of action.

Mr. Miller said that he is willing to work together with his NDP colleague to resolve the issue as soon as possible. “This is beyond partisan politics,” he said.