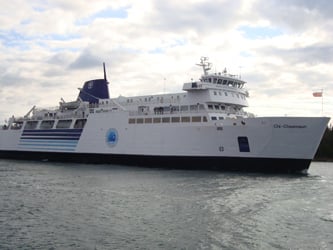 TOBERMORY—The Big Canoe saw roughly 4.5 percent less people and vehicles in 2011 than they did in 2010, according to Owen Sound Transportation Company’s manager of operations.

Ian Dean told The Expositor that the Chi-Cheemaun ferry transported 71,039 vehicles and 180,768 between Tobermory and South Baymouth, and vice-versa, before the end of the season last month.

The last time the Chi-Cheemaun had an increase in numbers was 2007, though last year’s numbers were on par with those of the year before.

Currently, the Chi-Cheemaun is in Thunder Bay for its mandated five-year inspection, Mr. Dean said. He said the ferry will be put into dry dock and inspected for damage and problems that need to be prepared.

He said the company doesn’t expect there to be any major changes to the schedule, but couldn’t promise a fare increase wasn’t in the works, as the company needs to hear back from the Ministry of Transportation first.

The largest vehicle ferry in use in the Great Lakes, the Chi-Cheemaun—Big Canoe in Ojibwe—is the only connection to Manitoulin Island other than the swing bridge in Little Current.

At 365 feet in length and nearly 7,000 tons, the ferry can carry 143 cars and 368 passengers per trip. The 30-mile trip can be made in less than three hours, with an average speed of 18 miles per hour, according to the Owen Sound Transportation Company’s website.

The 2012 season will be the Chi-Cheemaun’s 38th year in service making the run from South Baymouth to Tobermory and back. It replaced the Norisle in 1975, and the old ferry is now on display in Manitowaning.

The Chi-Cheemaun shared the duty of transporting vehicles and people back and forth for four years with the Nindawayma, its larger ‘sister’ ferry. The ferry stopped sailing in 1993 and was sold in 2000.

For more information about the Chi-Cheemaun, visit www.chicheemaun.com.

Chi-cheemaun ferry to start season May 7