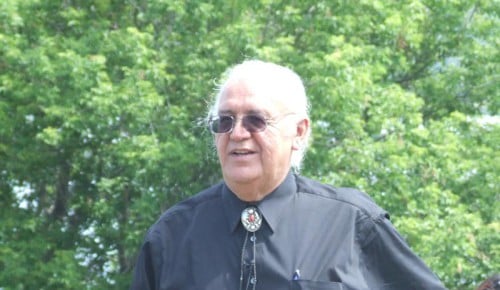 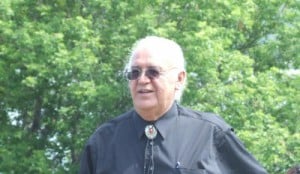 MANITOULIN—Earlier this month, M’Chigeeng First Nation Chief Joe Hare spoke out against the practice of ‘carry home’ methadone, calling for an end to this practice after what Chief Hare suspects is the methadone death of M’Chigeeng band member Daniel Dallas Joseph Anwhatin. Chief Hare’s announcement led to a special meeting of M’Chigeeng chief and council, UCCM Anishnaabe Police Chief Rodney Nahwegahbow and OPP Staff Sergeant Kevin Webb to discuss possible solutions for the methadone-related deaths and problems in the community.

‘Carry home’ is the ability to take home several days worth of methadone (the synthetic opioid used to help the treatment of those with an opioid dependence and mitigate withdrawal symptoms).

Chief Hare claimed that he has tried talking with the Island methadone doctor, Dr. Brian Dressler, in the past following the death of 22-year-old Trista Panamick, also of M’Chigeeng First Nation, who overdosed on methadone in July of 2011. Her death led directly to three individuals being charged with manslaughter and also with trafficking methadone. However, he said, “It has gotten us nowhere. He is still prescribing carry home methadone.”

Last week, Chief Hare told The Expositor that, “The doctor is being negligent.”

“He is not looking after his patients and he is not even offering the counselling, which is supposed to be a key factor in the treatment program,” claimed Chief Hare. “Dr. Dressler’s methadone clinic is just not working.”

At last Tuesday evening’s meeting of M’Chigeeng chief and council, Chief Hare said the group laid out a new multi-point action plan, which includes the implementation of counselling, training programs, education, and traditional practices to assist with the treatment and prevention of addictions of all kinds affecting band members.

“In addition to the action plan, we discussed a trespassing bylaw, drug bylaw and a community and methadone policy,” explained Chief Hare. “We also asked the OPP, in conjunction with the UCCM, to start an investigation on what has been happening, from which point the band will take further action to stop Dr. Dressler.”

Though other Island residents share Chief Hare’s concern with the methadone carry home program that has also led to a death in Wikwemikong in 2010 (29-year-old Leslie Trudeau), some claim the methadone program is working, praising Dr. Dressler’s work. Western Manitoulin resident Wayne Alton is one of them.

“I was very angered to read Chief Hare’s comments in last week’s Expositor story,” began Mr. Alton. “I have been on the program since 1994, and have been Dr. Dressler’s patient since I moved up here from London six years ago.”

“It is a sad thing when someone is addicted to an opioid, but a stable methadone patient is the last person who is going to be involved in drugs,” claimed Mr. Alton. “Methadone provides a way out—a way to take people away from the drug scene and hopefully allow them to reintegrate themselves back into mainstream society. The carry home system is an intricate part of the program––it allows people to be free and live their lives. I am a carry home patient and without the ability to be able to do so, I would not be able to live my day-to-day life.”

Mr. Alton explained that before moving to Manitoulin he was part of a methadone patient advisory group and stands behind the program and Dr. Dressler.

“Dr. Dressler is a real stickler for the guidelines, and not all doctors are,” said Mr. Alton. “He even requires a contract for carry home patients, on top of the required lock box. Dr. Dressler, like the many methadone doctors across the province, is one of the most compassionate, caring individuals out there.”

As for Chief Hare’s comment that Dr. Dressler is “killing his (M’Chigeeng) people,” Mr. Alton claims this statement couldn’t be further from the truth.

“Dr. Dressler is saving lives,” Mr. Alton told The Expositor. “He is a doctor—he is clearly not killing people. Chief Hare has said he is going to the College of Physicians and Surgeons of Ontario to put an end to carry home methadone—he is trying to change years of research and work. Dr. Dressler has to have faith in his clients that they will follow their contract and the rules in place to help his patients get better. His only concern is the wellbeing of his patients. These other claims are ungrounded.”

As for the claimed problems in M’Chigeeng, Mr. Alton suggests that the community set up a methadone dispensary in M’Chigeeng.