Not everyone remained for all of the 30-plus presentations to the entire International Joint Commission (IJC) board on the Lake Huron water level issue, but for nearly all of the proceedings Sunday at the large hall at the Northeast Town Recreation Centre in Little Current, more than 300 people remained in their seats on a sunny weekend afternoon. It was also a clear indication that the Manitoulin Stewardship Council, in pushing the IJC to hold a Manitoulin hearing, had very clearly and accurately assessed local concerns.

Attention was rapt and the levels of the applause that followed every presentation established, at least anecdotally, which concerns (and recommendations for their remediation) were foremost on most people’s minds.

The issue is the quickly falling water level of Lake Huron, Georgian Bay and Lake Michigan, all of which share the same height above sea level.

Over the past decade of falling water levels, authorities have always been able to point to historically low levels of these Great Lakes features and say that ‘well, it’s still above chart datum’, meaning that new record low water levels had not yet been achieved so things weren’t as bad as they had been in 1922 and 1965.

No one is saying that anymore and on Sunday, when references were continually made to new lows for Lakes Huron and Michigan (and, of course, the Georgian Bay and North Channel aspects of Lake Huron) no one from the IJC panel contradicted these observations.

If we’ve been living in denial, which it appears many of us have been on this very important matter (this newspaper, for example, has placed any number of stories prominently on its front pages during the past 10 years that optimistically proclaimed the current season’s water level to be at least no lower than that of the previous year, or even that the water level was an inch or so higher) the well-informed presentations on Sunday that reflected critical thinking, a grasp of the science involved, wide reading and close scrutiny of the world around us put an end to the naively optimistic ideas that things may get better on their own for it is very clear that this won’t be the case.

The IJC, at its hearing on Manitoulin Island, was seeking response to a report prepared for it and presented in March of this year, authored by a group of prominent academics from both Canada and the United States and drawn from their research, modeling and consultation.

The 214-page report, titled “Lake Superior Regulation: Addressing uncertainty in Upper Great Lakes water levels,” largely suggests simply waiting to see what will happen next (although, in fairness, a number of man-made interventions are explored but not recommended).

This is the message that is most prominent in the report and that message was exactly what the 300-plus people who attended the Sunday session already knew they did not want to hear.

Following this round of hearings on the report’s findings and recommendations, (hearings have already been held in Michigan and Wisconsin regarding Lake Michigan and in both southern Ontario and in ports on the Michigan side of Lake Huron and the Georgian Bay-North Channel hearings were to continue this past Monday in Parry Sound and then in Midland and Collingwood) the IJC panel and its support staff will analyze all that they have seen and heard and may discuss with the report’s authors about issues that citizens feel have been improperly or inadequately addressed.

Some time next year the report may (or may not) be altered to reflect the community’s views and concerns.

That is the process and it is clearly one that is frustrating to many people who see the natural environment altering, perhaps irretrievably.

No one denied the observation, made in different ways by several presenters, that man-made changes that would stem or at least slow down water outflow from Lake Huron at various points might be upsetting to communities at the southern ends of Lakes Huron and Michigan even while they could mitigate some of the declining water level issues in the North Channel and Georgian Bay.

What many presenters suggested, to the most applause, was that the only solution may be government-imposed (two national governments, the provincial government of Ontario and four state authorities south of the border) regulations whereby every region and community gives up something for the common good of the entire Huron-Michigan basin.

Can we accomplish this? Is there the political will? Will governments even accept such a recommendation from the IJC should the body decide to move forward to present it?

That will be, very likely, the greatest hurdle of all. 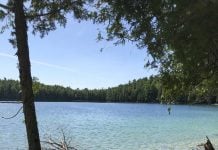 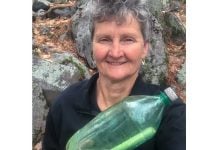