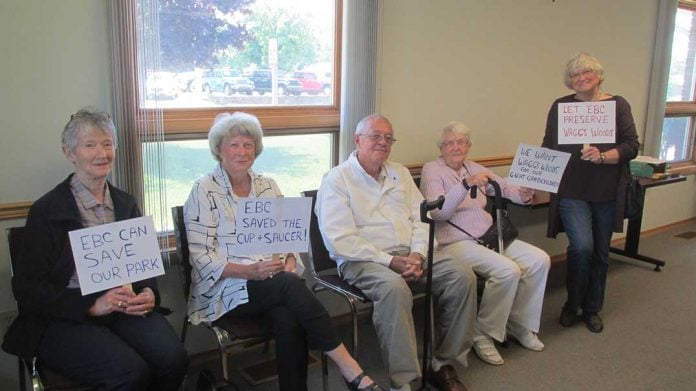 MINDEMOYA – The overwhelming majority of the 30 or so local residents at a meeting on Tuesday, including the executive director of the Escarpment Biosphere Conservancy (EBC), implored Central Manitoulin council to reverse its previous decision to not transfer the Wagg’s Wood property to the EBC. One of their main concerns is that the property could be sold by future councils.

“Our trust was badly shaken when two portions of the land in the park were sold,” stated Diane Meehan, a granddaughter of the original owner of the property, A.J. Wagg. “We believed the status of the park was going to be permanent, the earlier council believed this. It was devastating and totally disappointing to my family and community when these properties were sold. There wasn’t even any advance warning. EBC has roots on the Island. Many local people support them and believe them. You (present council) may not be here next time, councils come and go, and we are much more comfortable to have an organization that has a long term view for hundreds of years owning the property.”

Bob Barnett, executive director of EBC told the Central Manitoulin office and administration committee (made up of council members) at the Tuesday meeting that nature plays a huge, but little-seen role in the economy. “MNRF has issued a report which concludes that nature contributes $85 billion a year to the economy of Ontario. This includes protection from flooding, carbon sequestration, cleaner air, water, more pollinators and many other factors including tourism and protection of rare species. Nature contributes $1.8 billion to the economy of the Greenbelt through outdoor activities alone.”

Nature is good for people’s health and education, said Mr. Barnett noting that numerous physicians have reported that spending time in nature makes health better. “We think protecting nature is pretty important,” he said noting the EBC is one of 40 land trusts that protect 90,000 acres of land. “We protect as much land (0.74 percent) as the province (Ontario almost one percent) and in total 4.41 percent of land is currently protected.”

“Land trusts are doing most of the recent conservation work, yet development outstrips conservation by 300 acres a day,” said Mr. Barnett. He outlined the role of the EBC, a charity recognized by the Canada Revenue Agency and is run by directors, two of whom are from Manitoulin. The EBC operates from east of the Niagara Escarpment to Lake Huron, including Manitoulin. On Manitoulin the EBC protects 27 nature reserves with 2,142 acres, including over 18 kilometres of Lake Huron shoreline.

“It’s right here in Mindemoya, contributing tourism dollars to local businesses. If we owned the land, the township can maintain the stream,” confirmed Mr. Barnett, going on to note, “if we own property we don’t object to what people do next door except in a case where gravel extractions were taken below the water table that would have drained our wetlands. We would maintain the trail and public access.

He pointed out the EBC has 93 reserves smaller than Wagg’s Woods and said it “has many parallels with the Cup and Saucer Trail where EBC works cooperatively with NEMI and welcomes over 10,000 visitors annually.” He said that if EBC folded it would transfer the land to another land trust, it could not be sold off under the terms of the charity’s charter. “We could transfer Wagg’s Woods back to the town,” he said, responding to concerns about the disposition of the land should the EBC fold.

Councillor Angela Johnston posed several questions to Mr. Barnett, who explained “no we have no authority over what people do next door to any property we have.” He said many people confuse the EBC with the Niagara Escarpment Commission that has regulatory authority. “We purely deal with making nature reserves to protect the land, nature and make sure it is accessible to the public.”

“We’re required under the Charity Act to transfer lands back and we have been going for 21 years; if we ever folded that option would definitely be there,” said Mr. Barnett.

Councillor Johnston outlined a letter that had been sent by a representative of Central Manitoulin Public School, who noted how much the school uses Wagg’s Wood for school activities and events and how they hope this will not change. “Would this change if EBC took over the property?
“We would encourage the school and public usage of the property,” said Mr. Barnett. And, when asked, he said a conservation easement could also be a possibility with the municipality.

When it was mentioned that the municipality had offered EBC a 99-year lease on the property Mr. Barnett said, “we’ve never done a lease before. We prefer something which would provide more longevity than that. I’m not a lawyer but a person who owns property can change their position and sell it.”
Councillor Dale Scott asked whether Mr. Barnett is aware of the Manitoulin Planning Board having received concerns from the EBC on a landowner’s property on the West End of the Island. “I got from a municipal official that the EBC had raised concerns.”

“I don’t know the specific property you’re referring to,” responded Mr. Barnett. He did note that “when the Official Plan process was taking place we made suggestions that it should be more conservation friendly, but the board didn’t take much heed of our suggestions.”

Mr. Barnett said the EBC would be in favour of the municipality accessing the property if the issue ever arose where animals or vegetation affected the flow of water from the stream.

Jan McQuay was the next guest speaker to make a presentation. “I would like to thank you for the opportunity to speak today about Wagg’s Wood. It’s neat to see so much local support and people having showed up here today. I don’t think most people realize part of the park has already been sold. That is what triggered this meeting. But now that everyone knows, we don’t want any more sold. We are lucky because the EBC offered to protect Wagg’s Wood.”

“EBC is a land trust, that’s ‘what they do, protect property and they are the most logical group to own and protect the park,” said Ms. McQuay. She pointed out that last December council had accepted, in principle, to transfer the property over to the EBC. “I have no idea what happened that this was changed to offering a 99-year lease.”

“It’s the only forested public park in Central Manitoulin,” said Ms. McQuay. She pointed out it has been neglected over the years. “The municipality already sold part of the park, what would prevent this or future councils from selling more? If the EBC has it, it can’t be sold.”

During her presentation to the committee, Ms. Meehan said her family wanted to do something special with the property and that is why it was  first offered to the municipality. “EBC will work actively with local organizations to protect, MALT and the Manitoulin Nature Club and other groups to clean the entrance and built most trails, and possibly build a lookout all will be able to access to view the entire park. Right now there is not easy access to the park. The entrance is almost totally blocked to anyone wanting to access its natural beauty.”

“Today you have the opportunity to change that,” said Ms. Meehan.

Councillor Scott noted that under the provincial policy statement that includes the proviso for green spaces in the new official plan (for Manitoulin), while some residents are concerned the park could be sold off, provincial policy doesn’t allow for this.”
“I’m aware of that,” said Ms. Meehan. “But politicians come and go and they can make changes to rules and laws. EBC does not have that opportunity; it cannot sell the property. I really believe the park would be better off in the auspices of the EBC.”

Mr Barnett noted the EBC is a federally regulated charity.

“But governments change, they come and go and rules and regulations can change for them as well as municipal councils,” said Councillor Scott.

“My point is and the other word I will use is that I believe the EBC would work cooperatively and achieve an improved park for the residents, and visitors and would not be able to sell the property,” said Ms. Meehan.

“Who is to say that the EBC would not join the Niagara Escarpment Authority that does make policy, and change the nature of the park,” said Councillor Derek Stephens. “We’re trying to improve things for our businesses and municipal landowners.”

It was pointed out that the EBC cannot “join” with the Niagara Escarpment Authority. Should the EBC dissolve the property could revert back to the municipality.

“I realize my side on this issue is extremely overrun,” said local businessman Wayne Legge. “Yes, I was one of the business owners that bought property off the municipality.” He pointed out the expansion of his business resulted in six more residents moving permanently to the Island.

“I have very deep roots in this community,” said Mr. Legge. “I give back time and money in the community. I would caution the municipality I don’t believe all the facts are being brought forward by the EBC. When any time of rezoning or rebuilding is planned, any adjacent landowner can raise objections. Bob said the EBC does not do that, but I don’t think he is telling the truth on this. If I said I wanted to change something on my property the EBC would be considered an adjacent landowner  so they would have a say.”

“We have the right to object but the point is we don’t,” said Mr. Barnett, noting that in its entire history it has only objected to the aforementioned gravel pit plan that would have drained the water table from their property.

Mr. Legge stressed to the meeting that the municipality had purchased the Wagg’s Wood property and this was confirmed by CAO Ruth Frawley, who said a deed indicates the municipality paid $60,000 for the park.

“The park is a crucial part of the community,” said Mr. Legge. “It should not be given away, it should be saved,” he said, adding he feels the municipality should not transfer ownership of the park to the EBC.
Councillor Linda Farquhar, chair of the committee indicated no decision would be made by council at this meeting. “We will discuss this issue at a later date and be in touch with the group and community when the decision is going to be made.”