MINDEMOYA – The stands were packed all weekend long with onlookers as were the three ball fields during the second annual Mindemoya Youth Softball Tournament, held this past weekend.

“I’m happy, very much so,” said event organizer Greg Lockeyer. “First off, the weather co-operated—it was beautiful. We had 27 teams, with one team dropping out two days before the start of the tournament. We had just over 300 kids taking part, plus each kid has at least one parent here and the other spectators.” He pointed out the number of teams in this year’s event was considerably more than last year’s 18.

Mr. Lockeyer noted that an extra ballfield, located at Central Manitoulin Public School (CMPS), was used to host eight games at this year’s tournament. “We received good co-operation from (CMPS). We planned to do work over the summer to get the field ready to use and put in a shelter and a portable washroom. We put the flagpole, which came from Jays Care Foundation, up on Friday.”

He explained the organizing committee made up of Tamey McAllister, Reid Taylor, Shannon Drouin, Steve Redmond, Glen Duncanson, Alan Davy and Annette King received support from a number of Island businesses as well as funding from Jays Care Foundation to help construct the schoolyard ball field. The Tehkummah Fire Department made sure the fields were well watered on every morning so that each of the 59 games took place in the best possible conditions.

“You could tell the kids were all having fun,” said Mr. Lockeyer. “You could tell by the expressions on their faces and the laughing and cheering. It is different than hockey where players wear face masks so you can’t see their face.”

“Mindemoya has developed a good reputation of holding good events,” said Mr. Lockeyer. “The Pearson Cup has been going on since 1983 and there was skepticism when it first started as to how long it would go. This tournament is like a feeder system for it; the Hazards are one of the teams there and this weekend we had a team called the Mini Hazards.”

The brand new Doug and Kathy King trophy (dedicated in honour of their contributions to local softball) was presented to the Chiefs.

“Committee members did a great job; they worked very hard,” said Mr. Lockeyer, “and the umpires, all volunteers did a really good job. A huge thank you to all our sponsors, players and parents and the township for all their help during the weekend.” 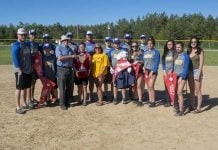