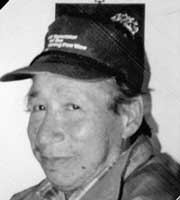 Clement George “Buddy” Endanawas of Sheshegwaning First Nation passed away on Wednesday, November 26, 2014, in his 66th year. Lovingly remembered by his brothers and sisters Joe (MaryAnne) of Little Current, Martha (Jim) Henrahen of Wiarton, David, Francis, Lillian LeBlanc, Christine Endanawas (Barry Morton) and Cecilia Endanawas, all of Sheshegwaning First Nation. Buddy will be sadly missed by his aunt Adeline (Jessie) Sampson, as well as many nieces, nephews and cousins. Predeceased by his parents Adam and Clara (Niganiwina), brothers Daniel, Tom, Jonas and sisters Helen, Evelyn, Sophia, the twins and Uncle Hank Niganiwina. Friends were received at the Sheshegwaning Community Complex from 2 pm on Friday, November 28, 2014 until time of the funeral service at 11 am on Saturday, November 29, 2014. Arrangements entrusted to the Culgin Funeral Home, Gore Bay. www.culginfuneralhome.ca.