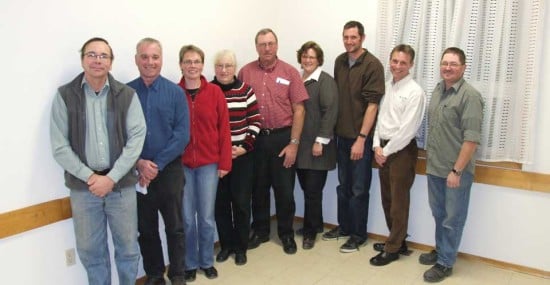 The new 4,200 square foot facility is a testament to the perseverance and determination of the MICA board, shareholders and membership, capping an odyssey through an ever-changing sea of bureaucracy that began five years ago and has absorbed over $1.5 million of local treasure and upper government funding.

In government grants, the project received $1,337,734 in financial contributions during 2012. Some $492,858 came from Industry Canada through FedNor, $715,707 from NOHFC and $129,168 from the Ontario Ministry of Agriculture, Food and Rural Affairs (OMAFRA). Under the terms of the grants (the majority of which have been deferred) should the facility be sold, cease certain operations, suffer total loss or fail to meet certain operating conditions, MICA could be required to repay up to $1,540,168.

Treasurer Marca Williamson presented the unaudited financial statements of the not-for-profit corporation that showed assets in property, plant and equipment of $1,959,789 and a loss of $30,527 for the year. The loss is not too surprising as the abattoir has been all about expenses so far, with little in the way of revenue coming from that end.

Nonetheless, the future is looking bright with the news that the Ontario Cattleman’s Association has upped its contribution to the facility to $435,000, 60 percent of which will be up front with the remaining $138,000 coming when the facility had been completed and all of the permits are in place.

Ms. Martin gave special thanks to the Northern Ontario Heritage Foundation Corporation, recognizing representative Esther Spadzinski in the audience. She noted that one of the expenses on the cash flow sheet was the cost of a loan guarantee by LAMBAC (LaCloche Manitoulin Business Assistance Corporation) that allowed the project to go forward before the funding from FedNor and other agencies had come forward.

The abattoir was required to complete a number of changes to the facility by OMAFRA, but those changes have had little impact on the cost of the facility. “Our agreement with Coldbox (the building contractor) is for a turnkey operation,” noted Ms. Martin. The one change that was made, to extend part of the rail system to accommodate more than a single carcass, is a notable exception as it was outside of the original specifications. Coldbox must engineer that change in order to maintain the warranty on the building.

Two new members, Jim Gilpin (returning for another term) and John McNaughton, were added to the board of MICA by acclamation during elections conducted by ag rep Brian Bell. The Western Manitoulin Recorder editor Tom Sasvari was appointed scrutineer for an election, should one prove necessary, but Bill Clark and Rob Breathat of Spring Bay declined nominations. In order to sit on the MICA board, the candidate must be a Class A shareholder of the corporation. The appointment is for a three-year term. There are six members in total on the board and each year two members of the corporation are up for election.

Those attending the AGM were brought up to speed on the management team, consisting of Joan and Dave Brady, and their duties. Those duties consist of oversight of the plant construction and equipment, developing plant protocols, managing Papa’s Meat’s and Deli, learning the meat cutting trade, marketing Manitoulin meat and maintaining and developing new clientele and connections.

There are two classes of shares in the corporation. Category A (voting), which requires a $300 investment, Category B shares (non-voting), which are those who originally participated in the project as a steering group and paid $100, as well as non-share contributors who have simply made a donation to the effort.

MICA fees are set according to membership status. Category A members will pay $110 for beef, $50 for hogs, $33 for lambs, while Category B members and non-members will pay an additional 50 percent surcharge.

The fees are all inclusive for the kill, disposal, storage/hanging and transport to a member processor. There will be a delivery charge to any non-member processor. HST and other applicable fees will be extra.

The abattoir is now on schedule to be inspected on December 21. “At that point they will either pass us or indicate what more they want to have done,” said Ms. Brady. If all goes well, the plant should begin operation on a limited scale in January. “We don’t have an exact date,” said Ms. Brady, noting that Thursdays have been suggested as a possible day of the week to begin operations.

MICA has purchased Pappa’s Meats and Deli of Providence Bay to operate as a retail outlet for the abattoir, noted Ms. Brady. “Papa’s is a for-profit business that is wholly-owned by MICA,” she explained. For the past several months she and her assistant manager (and husband) Dave Brady have been learning the ropes of a retail meat processing operations.

“We really appreciate Jim McCormick,” she said. “He has taken us under his wing.”

Papa’s Meats has a solid clientele list, noted Ms. Brady, and the company is aggressively marketing the Manitoulin brand off-Island as well.

The branding is based on a “Pure Island, Pure Taste” program that will require investment as a member of MICA and a number of quality assurance criteria including breed quality assurance programs, production protocols including being raised on Manitoulin, specified injection sites on the animal and AA or better quality with not growth promotants or sub-therapeutics, using Island grown grains and cull cows to grade D1 o D2.

The plan for the abattoir is to begin slowly, with two to three kills per week. “Then we will ramp up a bit,” said Ms. Brady.

Following the meeting, the new board held its first meeting.