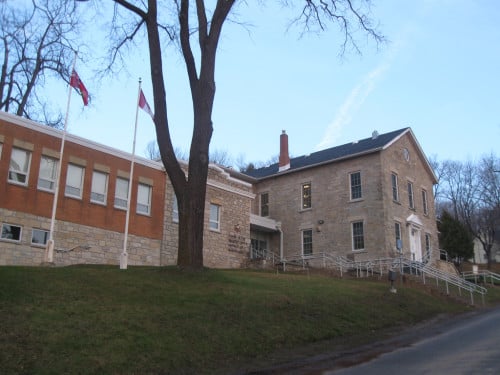 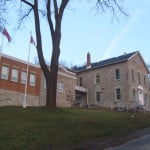 GORE BAY—The discovery of mould and asbestos in the Gore Bay courthouse building (which includes the land registry office) has left employees upset, not only that it was discovered, but that not all correct precautions were taken in removing the two problems from the building, leaving employees exposed to the elements. Employees are also upset they were not given details on air quality problems and what the possible causes of their health concerns were, which raises the question, why were they not removed from the building when the remedial work and testing was being carried out?

“I’m severely allergic to mould and have had pneumonia since May,” stated Shirlene Weir. “Now I am hearing I’ve been exposed to asbestos along with mould. My health has gone straight downhill.”

Ms. Weir told a meeting on Monday of Ministries of the Attorney General and Labour, Infrastructure Canada, CBRE Limited and representatives and employees of the courthouse, “I have been furious about this as have other employees for the past two weeks—we have received nothing but double talk and nothing in writing until now. We are supposed to be in a safe environment to work in, but most of us have had health concerns and nothing was done.”

Ken Wall, regional director of property and land management services with CBRE Limited, told the meeting (with about 30 people in attendance on Monday evening at Gordon’s Lodge), “the purpose of this afternoon’s meeting is to go into a little more detail on what has and is taking place. We understand you are worried about health concerns, and this is foremost to us as well.”

“It is not only us who work in our courthouse that have been affected,” said Gail Hunter. “There is also the instance of what we (unknowingly) have brought home. I had a son with hives and another employees daughter had the same, while another child had an asthma attack, all probably associated with the mould in the building.

Employees had contacted the Ministry of Labour after employees began to notice strange symptoms with their health during the renovation to the building.

Brendan Crawley, in media relations representative with the Ministry of the Attorney General, told the Recorder in an email that as a result of the health concerns expressed during the project, an environmental occupational health consultant was engaged. “The consultant has indicated there is no significant health risk,” he stated.

Mr. Crawley further pointed out that, “out of an abundance of caution, staff and services in the Gore Bay courthouse have been temporarily relocated as work is undertaken to address air quality issues,” leading to the move to the Gore Bay town office. “Staff will be kept out of the building until we have confirmation the air quality is safe and the building can be reoccupied. Remediation of mould and asbestos in the courthouse is complete and cleaning is underway.”

Dr. Om Malik of ECOH Management Limited told the meeting Monday that mould particles had been discovered in air quality tests after which the building was searched and a small area was discovered in the bulkhead over the Crown administration office, about 100 square feet. He also said there was mould under the carpet in the main courtroom, which had been disturbed when the carpet was pulled up. A special work crew was subsequently brought in and the mould cleaned out. Subsequent air testing showed there were no mould particles in the air.

Dr. Malik also outlined a problem with the ceiling tiles in the main floor Crown’s offices contained asbestos. He pointed out it is in a hard form and is safe unless that form is broken or perforated. Air quality tests last week showed there was no asbestos detected in a form that could be harmful to humans. As well, all of the ceiling tiles are going to be replaced as a precautionary step.

There was also mice feces, which the employees insist was actually bat feces, in the attic, which is being vacuumed with all the insulation removed and new insulation mats being put in, Dr. Malik told the meeting. As well, he did point out there is an issue involving the air quality exchange systems which will be fixed temporarily, with a permanent solution being planned. He said carbon dioxide levels were high, which means there was not enough fresh air circulating into certain parts of the courthouse, and this led to some of the symptoms employees were affected with.

Among the symptoms employees have relayed are headaches, skin rashes, welts, fatigue, eye and throat irritation and general anxiety, said Dr. Malik. He told the meeting it was three days after the carpet was removed on the second floor of the building that the amount of symptoms increased.

Dr. Malik noted that when he arrived on the site the courtroom and jury room were being renovated. Old carpet was removed and sanding of ceiling with use of tools that create vibrations and raise dust. He also pointed out that “there was a containment barrier set up, but it was not quite 100 percent effective in containment and there was dust that settled outside the containment area.”

Dr. Malik said based on the findings of the indoor air quality assessment, ECOH recommended the mould growth be removed following level three safety precautions as outlined in the Canadian Construction Association Mould guidelines for the Canadian Construction Industry 2004. Removal of asbestos- containing ceiling ties as part of the mould remediation was to also be carried out. It was also recommended that the feces and other debris in the attic be removed using a HEPA equipped vacuum cleaner, and the fresh air intake be increased to address the above recommended carbon dioxide readings and investigate the cause of the staining underneath the tank in the basement and address as required.

The meeting was told the company ServiceMaster was retained by CBRE on November 17 to remove the mould growth and asbestos tiles in accordance with the consultants recommended safety precautions, with work started November 21. It was on November 22 that concerns were raised with regards to the mould and asbestos remediation. Two days later, cleaning was changed to include the entire courthouse on November 24 and the cleaning commenced by Al Langman Construction on November 25.

Analytical results for the air samples indicated that airborne mould and asbestos are within acceptable levels and verbal results from the lab analyzing the dust wipes conveyed that none of the seven samples analyzed to date contain asbestos fibres.

Cleaning continued and was to be complete on the evening of November 28.

“The air quality results show the dust in the air is within specified guidelines,” Mr. Malik told the meeting. However, he pointed out there is a need for more fresh air in the building and this can be linked to headaches, fatigue and general malaise employees had been relaying.

“And the bad news is there had been a type of mould present, but most of the building there has been no contamination and the duct work was not contaminated,” stated Dr. Malik. He said a high proportion of the mould, about 42 percent, was caused from the construction work. Remediate actions were taken to get rid of the mould, while the ceiling tiles were removed.

“So everyone is saying that everything is okay now, there is no worry, and for the people who are not allergic that may be, but what about those who are?” asked one court employee.

Monica Kumala of ECOH Management said for those employees allergic to mould, the type found can be put into a report to allow the employees to report this to their doctors to test for possible exposure.

“Was the basement under the registry office inspected and samples done as well?” asked Colleen McQuarrie, pointing out she also recently had pneumonia.

“They were all tested, none of the rooms were excluded,” said Ms. Kumla. “My concern was a breach of containment of dust to the offices, and this work was done before we were on the scene, so I can’t say there was definitely no exposure (to mould).”

“Type or level to be the legislative standard,” said Dr. Mali.

“We already know there were ceiling tiles broken during the work,” said Karen Pritchard.

Ms. Weir said under a level three procedure, large double yellow bags stating ‘mould-asbestos’ would be used. However this wasn’t the case as single bags were used to remove the substances out of the construction area. “I know on the day the carpet was removed, that night my lungs felt like they were on fire and my throat felt like it had glass in it. There was something there and I and other employees had to work eight hours in this.”

Mr. Wall said, “I have nothing to say from the contractor’s point of view, but we jumped the gun on getting the remediation work done. When we heard mould we felt we should get this out of the building as quickly as possible.”

It was asked whether the employees had been told to leave the building when this work was carried out. It was noted Crown Attorney Stacy Haner said employees were told they couldn’t leave until there was scientific evidence that there is any health concern.

One of the employees told the meeting the work area should have been cordoned off properly and the employees removed from the building.

With all the necessary remedial work and sampling completed, final air quality testing will take place before the building is reopened, said Dr. Kalih.

Along with the health concerns, the closure of the building has had a significant affect on courthouse staff work. “We work so hard just to keep up and we haven’t been able to do anything for a week, we can’t even get disclosures (from offices) for court cases,” said Ms. Haner. She said “high level governments need to put protocols in place in cases like this, so we can have a place to work out of (when the court building is closed). “

It was stressed by lawyer James Weppler, “Our clients are people that come from everywhere. We as council can’t advise them where they are going to go and we don’t have proper space to work out of. We have had clients (prisoners) in shackles and orange suits being paraded in front of people in town (with court in the town hall)—it isn’t right. We can’t interview people we are representing.” He said there are other buildings beside the town office hall that can be used to hold court.

“At this point our air quality sampling will be completed today,” said Mr. Wall. “Then an air analysis will be taken again, after the contractor will be here to finish the clean up on the weekend. If the air samples come back positive then we can release the building. Our goal is to have the court office building open a week from today (Monday).”