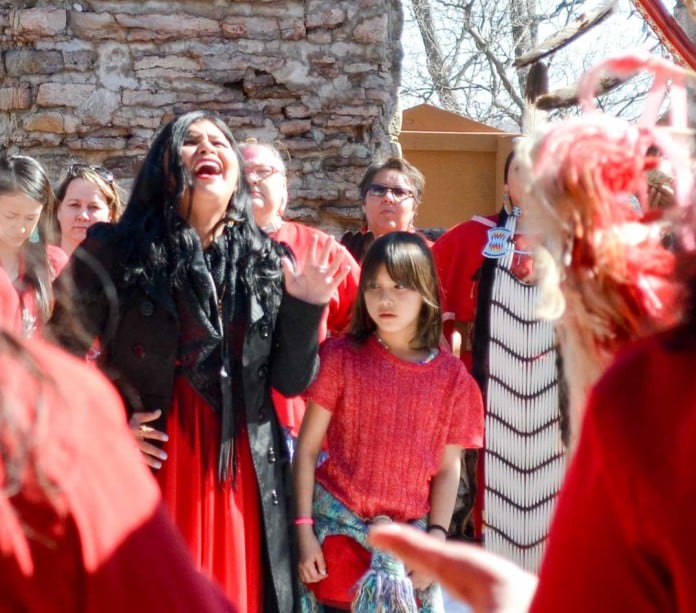 Directed by Debajehmujig Storytellers stalwarts Joe Osawabine and edited by Matthew Manitowabi, the music video interprets the story of a fictional missing and murdered indigenous woman through images paired with the music of Crystal Shawanda.

When a project is infused with passion, completion can be its own reward, but it is nice when others come to share that passion and recognize the importance of the story you are trying to tell. If there is a common element to the singer/songwriter and her video’s production team it is passion about the subject at the heart of the video’s focus.

“I’m just so thankful this video has been nominated, in the hopes it will continue to raise awareness, which was always its purpose, and our mission,” said Crystal, who is currently on tour promoting her new album ‘Fish Out of Water.’ “I’m also excited to see Joe and Matt’s work being recognized on a higher level; representing Debajehmujig, a group that doesn’t get the credit they deserve.”

Crystal is originally from Wikwemikong and has a longstanding friendship with Mr. Osawabine and when it came to sourcing the talent she trusted to bring her song to the screen, she quickly made the connection to Debajehmujig Storytellers and her friends back home.

“Hey sister did you hear, Billy Rose ain’t never been found. Went missing on the fourth of June, family hasn’t heard a sound,” that one line from ‘Pray Sister Pray’ speaks volumes of the pain felt by the families and friends of Canada’s Murdered and Missing Indigenous Women and Girls. The issue of more than 1,200 indigenous murdered and missing resonates through an entire nation on a very personal level. Beyond the losses and suffering, the issue serves to illustrate a systemic prejudice that continues to taint our nation’s relationship with its first peoples. Why the fictional Billy Rose of Pray Sister Pray, and the thousands of real women she represents, have never been found is a question a national inquiry is currently investigating.

“It’s pretty awesome actually,” said Mr. Osawabine when contacted about the nomination. While he is credited as director on the music video, Mr. Osawabine was reluctant to stand in the limelight alone. “Matthew and I pretty much co-directed and co-edited as well,” he said. “I got the director credit and he got the editing credit, but it was very much a team effort, and of course Crystal had final artistic control.”

But in the end Ms. Shawanda exercised a light hand on that control. “Ultimately she had the final say, but she basically said ‘you guys know what you are doing’,” he said. That confidence turned out to be well-placed. “When we did it, she liked everything.”

“It was very much a passion project,” admitted Mr. Osawabine. “Nobody made money off of this,” he said. “Everyone came out to be a part of it.”

“I am really proud of it,” said Mr. Manitowabi of the project and his involvement in it. The subject matter had a strong resonance for him. “It was something I went to sleep with and something I woke up to every morning,” he said. “Ideas would come in the night and I would get up and run to the computer.”

While this is Mr. Manitowabi’s first music video production, he is no stranger to film and editing or nomination to the American Indian Film Institute Awards. He was part of Shirley Cheechoo’s film ‘Moose River Crossing’ and is an alum of Ms. Cheechoo’s Weengushk Film Institute based in M’Chigeeng.

Mr. Manitowabi recalled the days of shooting the video and the unanticipated impact that process had on him.

“I remember when we were supposed to shoot a scene in March, and it was snowing, we thought we might have to cancel, but there were people who had answered the call to be in the video who were coming from really far away and some who had taken time off work to be there,” he said. “In the end we managed to make it work. We were driving out to a location in Kaboni when it really hit me. There were all these cars lined up, up and down the road. So many people had come out to be a part of it and they were from all over the place. Passion, yeah, that would be the way to describe it. It was great to see the support—you just knew you were part of something special.”

When the team shot the final scene in the Holy Cross ruins in the Village of Wikwemikong, the crowd of women in red dresses (the de facto emblem of the movement to recognize the plight of the missing and murdered indigenous women and girls) was overwhelming for everyone involved in the shoot.