MINDEMOYA – The annual general meeting (AGM) of the Manitoulin Island Cycling Advocates (MICA) shows an organization that is energized, productive and proactive. The MICA meeting was held May 6 at the Central Manitoulin Public School (CMPS) and board member Gordon Saplet of Mindemoya was spot on when he said, “we have a lot of successes” as he welcomed members.

This organization, an incorporated, not-for-profit group that is run entirely by volunteers, started in 2010 when Island residents Maja Mielonen and Guy Nielen advocated for paved shoulders on Manitoulin roads. And paved shoulders they received, with Highway 6 in 2010, Highway 551 in 2015, Highway 540 in 2017, and Highway 6 between Ten Mile Point and Little Current in 2018. As well, construction has already started on the extension of Highway 540 from Honora Bay to Kagawong with the sought-after paved shoulders which provides immense safety for cyclists while also extending the life of the sides of paved roads.

The focus of this MICA meeting was making your business benefit from cycling tourism and the first guest speaker was artist, actor, and CEO, owner/curator of Perivale Gallery, Shannon McMullan.

Ms. McMullan began by saying that bikes have always been important in her family. She noted how the children had to ensure their bikes were polished and sparkling each year “and then,” she said with a laugh, “it was off to the Island to ride the muddy roads.” She went on to say that cycling tourism was very important and she remembered when her mother was the owner of the gallery that a couple had arrived, by bike, from Elliot Lake. This was in the late ‘70s and the pair were seeing all of Manitoulin.

“What can cycling do for us?” Ms. McMullan asked, and went on to say that Perivale has always been a beacon for cyclists. “We are in the very centre of Manitoulin,” she noted, “and we have enjoyed Guy arriving with his tours. Cyclists often linger and we encourage picnics. We provide water and washrooms and gardens. We have signs in the windows that say, ‘we welcome cyclists,’ and we take photos of families with their bikes in front of the gallery.”

Ms. McMullan spoke of one cyclist who then ordered a $5,000 painting, resulting in a huge payoff for the business.

If there is one concern regarding cyclists that Ms. McMullan has, it is those bikers who do not wear helmets. “I lost a brother to a cycling accident,” she said. “When I was teaching, if a kid was not wearing a helmet, I confiscated the bike.” Indeed, this is such a concern for this businesswoman that she hands out donor donation cards to anyone she sees who is foolish enough not to wear a helmet while biking.

The second guest speaker was Heidi Krieger who owns, along with her husband Serge, the Auberge Inn in Providence Bay. Ms. Krieger told the members that she had been biking for 15 years while the family lived in the Netherlands and thought that joining the MICA board would be a good thing. “Anyone who cycles,” she said, “kudos. They are buying everything on the Island. They are good guests. The cyclists are not leaving their carbon footprint.” Ms. Krieger went on to say that it is “amazing what MICA has done to make things safe, and we get benefits from MICA including representing us in Toronto and on advertising.” Ms. Krieger also noted that the couple learned from Bikes Ontario what they had to do to make things great for cyclists and that they had studied the MICA maps when she had first joined. “The over 50s pour over the maps,” she remarked when speaking of the hostel’s guests. “The younger ones take out their phones.”

MICA President Ms. Mielonen then presented her report on the history of the organization, saying first, “Together we can facilitate positive and safe experiences for all local and visiting road users alike.”

She spoke of the connection that took place in 2018 when the Georgian Bay cycling route was signed from Parry Sound past Midland, Owen Sound through Manitoulin to Espanola, west to Sault Ste Marie and east to Sudbury. “As part of the Great Lakes Waterfront Trail,” Ms. Mielonen said, “we work closely with Share the Road Coalition (SRC), Destination Northern Ontario (DNO), Northeastern Ontario Tourism (NOT), Ontario By Bike (OBB) and Destination Ontario (DO).” In partnership with Destination Ontario and FedNor, MICA installed eight trailheads in the spring of 2018 that have assisted thousands of visitors last year and will for many years to come.

The spring of 2018 also saw the printing of the 4th edition of MICA’s map that offers over 800 kilometres of cycling routes that are now identified with some cycle route signs.

“MICA’s maps,” Ms. Mielonen told her audience, “are sold all over the world, through our website, on the Chi-Cheemaun and at many Manitoulin locations. Thus far, over 11,000 copies have been sold.”

This organization also successfully launched Alvar Treasure Rides, an all-inclusive cycling adventure package in 2017. These guided tours feature five days of cycling with four nights stay at lakeside lodges and cottages. Ms. Mielonen advised that the four packages offered in 2019 are filling up fast and noted that these rides are bringing welcome business to Manitoulin and MICA in the shoulder season.

Cycle tourism on Manitoulin has increased considerably since 2012 as Ms. Mielonen that showed with close to 5,500 cycles in all of the past four years crossing on the ferry,  only 1,200 counted in 2012. A passage ride survey showed that 240 participants in the 2017 event spent over $96,000 and accommodation providers report that 13 to 20 percent of their annual income is due to cycle tourism. A large part of this increase is in part due to MICA’s annual visit to the Toronto International Bicycling Show (TIBS) for the past five years. Volunteers hand out over 1,500 This is Manitoulin magazines annually as well as Island brochures.

MICA has also contributed $10,000 towards the green cycle signs on Manitoulin highways.

MICA helps out locally and works with an OPP positive enforcement program on Manitoulin and the North Shore. The organization bought 1,000 cycle lights in 2017 and 2018 as well as 500 cycle bells for the initiative. This year, MICA gave reflective leg and arm bands for distribution to cyclists.

Ms. Mielonen also emphasized the advantages businesses can have by presenting as cycle friendly. Ontario currently has over 1,531 welcome cycling friendly businesses and DNO has made it possible for businesses to advertise as such for free on the Ontario By Bike (OBB) website once a criterion with very few and inexpensive items are fulfilled. DNO also offers many free self-evaluation tools for businesses and Tourism Excellent North (TEN) offers many benefits for tourism operators.

MICA also encourages all municipalities to include mobility plans into their strategic planning as are needed with the tourism and growing population, by including all road users’ requirements for safe, efficient and attractive movement in our communities. “Such mobility,” Ms. Mielonen noted, “will make moving about on our Island safer for people from ages eight to 80. It will create walkable hamlets, connected trails, safe roads and increased green spaces and parks.”

This year, MICA received the 2019 Welcome Cycling Friendly Business award and, at the Share the Road Summit in Toronto, was presented with the Wheels of Change Organization of the Year award.

Elections were held at the AGM with Ms. Mielonen remaining as the organization’s president with board members Peter Ford of Manitowaning, Sandy Cook of Kagawong and Mr. Saplet of Mindemoya serving for this term. 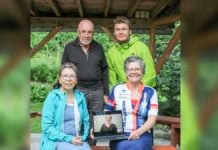