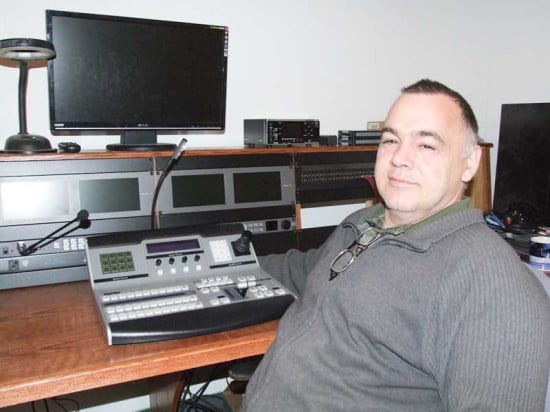 MANITOWANING—Technology is bringing a revolution to collaboration in the arts and Debajehmujig Theatre Group of Manitowaning plans to surf the leading edge of that revolution.

Local businesses and arts groups will benefit from the company’s acquisition of state-of-the-art technology, as the company plans to offer up any spare capacity commercially as a social enterprise endeavour to augment funding.

Administrative Director Joahnna Berti admitted to a personal philosophical divide when it comes to social enterprise as a driver and support for the arts, but fiscal realities in the current funding climate have created fertile fields for the concept to take hold. The opportunities for collaboration and extending the artistic reach of the company do create excitement for her though. “The population in the area is not large enough to support everything the company would like to do,” she admitted, but adds the reach of hi-speed Internet tools helps to expand both the reach of the company and its collaborators in the North. “The technology provides the opportunity to operate outside the narrow confines, expand artistic relationships and creates opportunities for diverse relationships that might not have otherwise been possible.”

Chris Deforge is the technical guru behind the technology. “Talk to Chris about anything technical,” laughs Ms. Berti. “He has the scoop on that end of things.”

“It’s funny,” agreed Mr. Deforge. “I probably know the least about what is going on around here artistically.” But when it comes to any technological feats of daring, the Debaj crew just consult on what they want or need accomplished and Mr. Deforge and his team make it happen.

Mr. Deforge practically grew up in broadcast. At age 17 he approached the principal of Manitoulin Secondary School after the audio visual tech left and offered to straighten out the department for AV credits. “It was quite a mess,” laughed Mr. Deforge ruefully. That early involvement in all things audio visual set him on the path. That summer he hitched a ride down to Toronto and began shopping his resumes to a variety of broadcast studios. A call came from the religious broadcaster Crossroads. “I called my mom and said ‘I guess I am not coming home for a while’,” he said. But something always drew him back to the Island and his home community of M’Chigeeng.

Stints with CTV affiliate CJOH in Ottawa grew out of unsolicited references, he filled in some of the years as an Apple tech for Northstar Computers out of North Bay and cabled much of the infrastructure in Nortern Ontario over the years.

But it was the opportunity to work for Debajehmujig that brought him home again. In order for his family to be able to return to the Island, his wife needed to find employment as well. Luckily, she is a seamstress and there just happened to be an opening in the costume department. Sometimes the stars just align.

Debajehmujig’s technological capabilities are impressive at the moment, but plans are in play to expand them even more.

“Right now we can do high definition video production in the studio ‘Sini style’,” said Mr. Deforge. He explains that involves setting up cameras at various angles, shooting a scene and then resetting the cameras for the next scene. “We want to move into live production.”

Debajehmujig has a dedicated fibre optic line with essentially unlimited upload and streaming capabilities. “We can literally match Netflix capability,” said Mr. Deforge. “I can get 100 megabit right through to Toronto.” During the interview, he is sitting in front of a bank of monitors and a control panel that allows remote adjustment of camera angles. If a pending funding proposal comes through, those banks will expand dramatically.

“There is no such thing as standing still in this business,” said Mr. Deforge. “If you are standing still, you are falling behind.”

As The Expositor tours the facility, we come across Debajehmujig Theatre’s website developer Justin Deforge and executive director Ron Berti in the company’s technology office, the duo are watching a 2011 TEDtalk by Grammy winning composer Eric Whiteacre. The story behind the incredible YouTube collaborations that have brought thousands of choral singers from across the globe together to perform Mr. Whiteacre’s works unfolds through the talk. It is a serendipitous illustration of the kinds of artistic collaborations being opened up by the world wide web.

As an added bonus to local businesses, or even businesses located across the globe, any open room in the studio schedule can be accessed for a wide range of services. Those services provided as a social enterprise will provide a welcome additional revenue stream for the theatre company.

The possibilities are bounded only by imagination, but include artistic collaborations, YouTube productions, remote video conferencing and presentations, hosted locally or accessed from just about anywhere on the planet. “As long there is a sufficient connection to the Internet, we can work with it,” noted Mr. Deforge.

Those wishing to explore how the technology centre at Debajehmujig can be made to work for their company should start by contacting Mr. Deforge at 705-859-1820 to discuss the concept and begin the process.