﻿GORDON—The Janet Head Lighthouse is closed to visiting members of the public until the end of the summer season as the municipality of Gordon/Barrie Island and the federal department of Fisheries and Oceans Canada (DFO) consider a possible new lease agreement. DFO owns the lighthouse and Gordon/Barrie Island leases the building.

Carrie Lewis, CAO/clerk-treasurer of Gordon/Barrie Island told council at a meeting last week, “DFO wants to amend the lighthouse building agreement for use of the building. The lighthouse will be closed to the public for the summer.”

“The building is not considered surplus, and DFO explained it is an operating lighthouse, one of the few around, and because of safety concerns DFO suggested it be closed to the public,” Ms. Lewis told council.

Heather Hannigan, acting senior real estate officer/real property with DFO, wrote in an email to Ms. Lewis August 3, “a few things have come up with respect to renewing this agreement. Our current director has asked that the agreement be revisited, given a number of emerging factors.”

“This site is no longer considered surplus and is a federal workspace,” wrote Ms. Hannigan. “The site is a functioning navigational aid and kept to a standard for that use only. Using the site for public access would require that the site be maintained to certain building codes, etc. Therefore, the agreement needs to be reassigned to ensure that we’ve met our due diligence with respect to safe public access.”

“In light of the potential condition due to infestation, we would highly suggest that public access inside of the structure be stopped at this point,” continued Ms. Hannigan. “We will, however, do an amendment to the recently expired lease agreement for the duration of this season and in the meantime hopefully develop a new agreement that accounts for everyone’s interests.”

Ms. Lewis, on behalf of the municipality had wrote previously, “as far as annual activities at the lighthouse, it is open in the summer months three days per week. The municipality employs a student to do tours that include historical information on the lighthouse those days and ensure the public has access to it to have a look inside and out. It is always available for photo-ops outside and that is taken advantage of often. Our municipal staff maintain the grounds. They have repaired the retaining wall on the ground next to the road, we ensure there is a porta potty for the summer months there, the grass is cut regularly. As far as the lighthouse itself, we have had the whole interior deep cleaned and painted. There is a problem at this time with wood eating bugs in the light tower. Someone from DFO should do a really good inspection. We do not maintain the light area much per say, however we have hired an exterminator to get rid of the bugs eating the wood and we clean up the piles of sawdust on the second floor that they leave regularly.” She noted as well, “We also put hydro back in when it was cut off for some reason, and the municipality pays the bill.”

Ms. Hannigan told The Expositor when she looked at renewing the lease agreement for the lighthouse with the municipality as has been in place previously, “my director questioned this because she had concerns with public access. I mentioned that the lighthouse is no longer deemed as surplus property and the site is a functioning navigational aid. We suggested that public access be closed off for the season due to safety concerns.”

Ms. Lewis in a letter to DFO August 8 on behalf of the municipality wrote, “the municipality has always felt the lighthouse is a very important part of our heritage and it has been very well maintained and taken care of by the municipality for a number of years. We did have the building sprayed to get rid of the bugs. We will not do anything further and leave it for your department to look after. Hope this good working relationship does not end for the benefit of the public, history and all.” 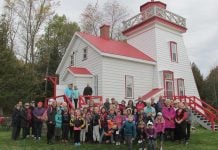 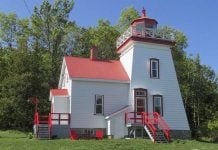 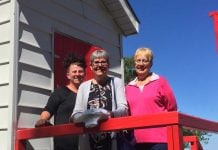 Janet Head, the person, visits lighthouse of the same name 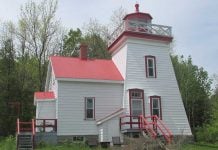 Historic Janet Head Lighthouse to reopen to public this summer