MANITOULIN—The winds of change are certainly blowing over Manitoulin in the lead-up to this fall’s Island municipal elections. Every Island municipality except for one will be holding an election. There will also be an election for trustee of the Rainbow District School Board (RDSB).

The Town of Gore Bay will see an election for both the position of mayor and councillor seats. Ron Lane, former mayor of the town, and newcomer Maureen (Mo) Armstrong will be in the running for the mayor seat.

There are a total of seven candidates in the running for the four Gore Bay council seats. They include incumbent mayor Dan Osborne, incumbent councillors Ken Blodgett, Pauline Nodecker, Leeanne Woestenenk and Aaron Wright along with Kelly Chaytor and Terry Olmstead.

In the Town of Northeastern Manitoulin and the Islands (NEMI) incumbent Mayor Al MacNevin has been acclaimed, as has incumbent councillor Laurie Cook in ward one. There will be an election for ward two with three people to be elected from seven candidates. They include incumbent councillors Allan Boyd, Barbara Baker, Michael Erskine and Bill Koehler along with Zach Nicholls, Melissa Peters and Elaine Milne.

For NEMI ward three George Williamson, who is running for the first time for council, has been acclaimed.

For the Township of Burpee and Mills incumbent reeve Ken Noland was acclaimed for another term. However, there will be an election held for the four council positions with a total of 10 candidates in the running. Incumbent Art Hayden is in the race for one of the councillor seats along with Nicole Middleton, Kim Middleton, Ed Wright, Mike Wright, Melanie Blain, David Deeg, Steve Dinsmore, Larry Pfeifer and Roger Morrell.

In the municipality of Assiginack there will be an election for both the position of mayor and the four council seats. Incumbent Mayor Dave Ham is seeking re-election for another term along with Brenda Reid, who has served as a councillor previously. There are a total of 10 candidates running for one of four seats on council, including incumbents Rob Maguire and Christianna Jones along with Dene Banger, Janice Bowerman, Dwayne Elliott, Theo Flikweert, Jennifer Hooper, Frank Klodnicki, Maureen Marion and Cheryl O’Brien.

There will be elections for the position of reeve of Tehkummah Township and for the four seats on council. Current councillor (and former reeve) Eric Russell has put his name in the hat for reeve of the township, along with John Carter Deforge. There are seven candidates in the running for the four council seats. They include incumbent councillors Lori Leeson, Mike McKenzie and Rick Gordon, as well as Paul Bowerman, Steve Wood, Gerard Lyons and Perry Chatwell.

Billings Township councillor Bryan Barker was the only candidate who put his name forward for the position of mayor of the township, being acclaimed. However, there are six candidates in the running for the four council seats. They include incumbent councillor Michael Hunt and newcomers Dave Hillyard, Jim Cahill, Vince Grogan, Mike Larocque and Paul Darlaston.

There are three persons in the running for mayor of the municipality of Central Manitoulin. Incumbent Mayor Richard Stephens is seeking another term, while Steven Shaffer and newcomer Maja Mielonen are also vying for the mayor seat.

There will be an election held in ward three (Sandfield) with three candidates vying for two council seats. Incumbent councillor Rosemarie Diebolt will be seeking another term on council along with former councillor Linda Farquhar and Lois Middaugh Keller.

There will also be an election held for the Manitoulin Island trustee on the Rainbow District School Board (RDSB). Incumbent Margaret Stringer, who had earlier this year indicated she would not be returning, has decided to throw her hat in the election for another term. Recently retired teacher Lisa Corbiere-Addison will also be running for the trustee seat on the RDSB.

The election will take place on October 24. 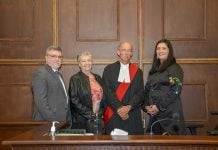 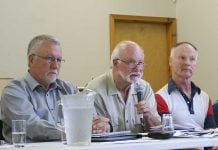 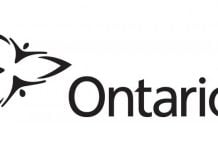