SHEGUIANDAH FIRST NATION – Elvis J. Mishibinijima has been elected as the new chief of  Sheguiandah First Nation in the band chief and council elections held December 9.

“I’m honoured that I had the support from the community members to be elected as chief,” Chief Mishibinijima told The Expositor last Friday. “I’m very much looking forward to being chief.”

Mr. Mishibinijima has served as a Sheguiandah First Nation councillor three times in the past.

Mr. Mishibinijima garnered a total of 35 votes in the election, to outdistance former Chief Andrew Aguonie who received 26 votes. Jake Aguoneh and Carrie Waindubence each had 17 votes, with Zoe Peltier receiving six votes for chief and Lisa Sagutch receiving a total of five votes.

Two incumbent councillors, Alison Aguonie and Pearl Waindubence, will fill two of the three seats on council, along with new councillor Sunset Sagutch.

In the election for council, Alison Aguonie garnered 60 votes, with Sunset Sagutch collecting 44 votes and Pearl Waindubence receiving 39 votes. Other candidates for a position on council and the number of votes they received include Nevada Waindubence with 34 votes, Orville Aguonie with 32, Ruby Thompson and Carolyn Pickford who each received 28 votes, Jackie Bowerman with 16 votes, Derrick Waindubence who received 15 votes and Lisa Sagutch with 14 votes.

The new chief and band council will serve a two-year term. 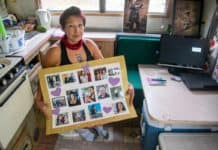 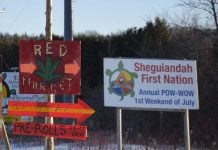