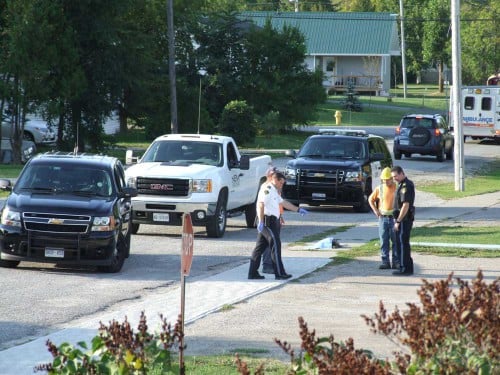 LITTLE CURRENT–On Tuesday, September 11 at 8:09 am, Manitoulin OPP received a call reporting of a hit and run collision that had occurred in the parking lot of St. Bernard’s Catholic Church on Hayward Street in Little Current.

Police arrived on scene to find a 71-year-old Little Current man injured as a result of being struck by a vehicle. Police quickly also discovered that his pet dog that he had been walking had been run over and killed. The man was attended to by EMS paramedics and was then transferred to the Manitoulin Health Centre and later released.

Police learned that the vehicle was described as a late model small white vehicle. It was broadcasted to other police units on the Island. A short time late an officer from the UCCM Anishinabe Police Service observed a vehicle fitting this description and stopped it on Hwy 540 near Bidwell Road in Billings Township. Through further investigation it was discovered that this was the alleged vehicle and driver in question. He was taken into custody for further investigation.

The driver was identified as a 58-year-old male from Denmark visiting Canada on vacation. He was operating a rental vehicle out of Quebec. As a result of this extensive investigation, the male was released from custody and charged careless driving contrary to the Highway Traffic Act of Ontario.