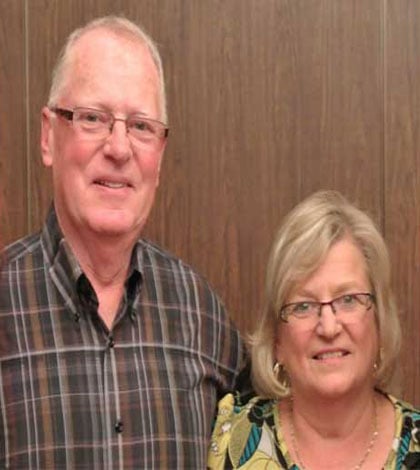 MANITOULN–An Evansville couple were presented with lifesaving awards by the Ontario Provincial Police (OPP) this week.

The awards were part of the OPP awards ceremony for the North East region, held in Warren yesterday (Thursday).

An OPP awards ceremony honours citizens and OPP members, both uniform and civilian, who have demonstrated acts of bravery, lifesaving, community service and exemplary performance of duty. Length of service is also recognized. As well as the Hayden’s recognition, several Manitoulin OPP officers received awards.

The Evansville couple was heralded by witnesses as heroes after helping to save the life of a Silver Water resident in August 2012.

As reported in the August 17, 2012 edition of the Recorder, “I definitely think the man and his wife, who had arrived first at the scene of the accident, saved the life of the woman who was involved in the accident,” stated Mike Meeker of the Burpee-Mills Township Volunteer Fire Department. He was referring to Art Hayden and his wife Cora who had travelled along Union Road on the morning of August 9 on their way to the Burpee Mills Community Centre to volunteer their time.

“Kathleen Robbie of Silver Water was the sole occupant of the vehicle (a 2000 Buick),” said Mr. Graham. He explained, “her car had struck a tree and went down an embankment. She was first transferred by ambulance to the Mindemoya Hospital and subsequently airlifted to Sudbury Regional Hospital with undetermined but serious injuries.”

Mr. Meeker explained, “I had received a call on the radio about the accident and when I arrived there was a couple there already. They indicated they had been driving along the road when they came upon a big branch in the middle of the road. They got out of the vehicle and moved the branch off the road and noticed bark off a tree was missing and there was glass from broken headlights on the ground. They looked over the edge of the road into the ditch when they noticed the car at the bottom of the embankment.”

“They went down into the ditch and found the lady cut very badly,” said Mr. Meeker. “If she had been there too much longer she could have died. The lady’s vehicle was hidden in the bush in a deep ravine. The couple (the Haydens) handled the situation perfectly, when he went down to the car to attend to the woman his wife went to a neighbours place to call 9-1-1.”

On their way back from the community centre, Mr. Hayden explained that he and his wife parked 200 metres away from the stretch of road where the branch was located, as the road narrowed there, and said he walked the length of the highway to remove the broken piece of tree.

“On the walk back, I noticed a black piece of plastic on the road. I thought someone must have run over the branch and did some damage to their car. I looked around some more and saw a headlight so I looked even more,” said Mr. Hayden. He said that a “very steep” embankment runs alongside the highway, and upon looking over the edge of the roadway, he saw what he believed to be a car in the bush seven or eight metres down.

“I called for my wife to come and we heard a radio playing from the car,” he explained. “I couldn’t get down to the car, but there was a laneway nearby with a house so we drove to it.”

After realizing the couple had not brought their cell phone, Ms. Hayden approached the house and used the phone there to call 9-1-1. By this time, Mr. Hayden had found the elderly woman in serious condition in her car and had begun first aid, calling for his wife to retrieve their first aid kit from the car. (Mr. Hayden is retired from his position as superintendent of safety for Inco).

While Mr. Hayden stayed with the woman in her car, Ms. Hayden and the woman from the house nearby began directing traffic on the roadway above, waiting for paramedics to arrive. The woman was eventually air lifted to Health Sciences North in Sudbury.

In a release from the OPP, Mr. Hayden was credited by police for saving the woman’s life and they would be submitting his name for a lifesaving commendation award.