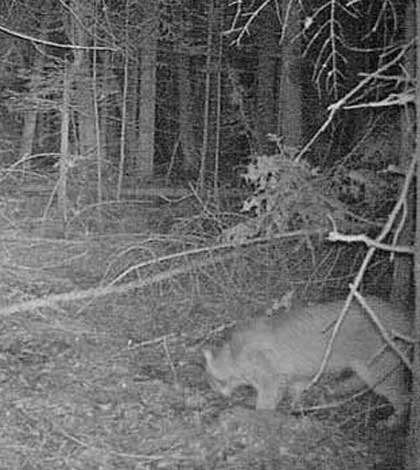 BAY ESTATES—The Expositor has two updates for its readers after an article about a possible cougar sighting in Bay Estates appeared in last week’s Expositor. While the cat in the photo on page 6 was not a cougar, it is in fact an F2 Savannah that has been missing for almost one month by its home and owner, former Expositor columnist Marc Bedard.

“I am informing readers that the spotted cat recently spotted in the Bay Estates area last week is not a dangerous wild animal but merely a cherished and loved family pet,” Mr. Bedard wrote in an email. “He is a docile and socially withdrawn male F2 Savannah cat and his name is “Rusty.” Rusty escaped our South Bay home approximately three weeks ago. Since his birth, he had never been outside. We thought that he might have succumbed to the many wild animals and foxes inhabiting the Slash Road area. We are amazed that he has wandered 35 kilometres to Bay Estates and are delighted that he is still alive.”

“We are concerned that Rusty may in time starve to death and are offering a $250 reward to any citizen who can peacefully capture/contain him without hurting him,” Mr. Bedard continues. “This cat is clawed and is understandably very frightened—he will not be approached or handled willingly. To capture him, it is best to offer him food (dry kibble or salmon) in an area where he can be contained (garage, shed, closed in area). Rusty will not make for a good pet since Savannahs have only one master. He will not use a kitty litter and he will eventually rip up your house trying to get back to his home. Should you have any information on Rusty’s whereabouts or have him in captivity, please contact Marc or Angie at 705-859-1303 (or email marcang.bedard@gmail.com). His last known location is in the Bay Estates area and we are reassuring residents that he not at all dangerous or mean but simply a lost, starving housecat.”

Last week, The Expositor also received a game cam photo from Rob Spec of an obviously large cat that had prowled its way onto Mr. Spec’s Mills hunting property in May. While the cat was obviously not an exotic species of kitty this time, the Ministry of Natural Resources (MNR) was unable to confirm it was a cougar because its tail did not make the shot. However, they said, it was definitely either a cougar or a bobcat, but were leaning towards bobcat.

“Too bad we cannot see the tail, otherwise a great picture,” George Luchuk of the MNR wrote in an email.

Mr. Spec said he has since changed the settings on his camera to take three at a time when activated, and not just the one. He’s assured us that we will be the first to know should he capture another photo.

For the time being, The Expositor is $500 the richer for lack of a cougar photo, but the reward still stands. If you capture a photo of a suspected cougar (remember, the tail is key) please email it to The Expositor at editor@manitoulin.ca. We will then send it on to our cougar experts at the MNR. The location of the photo on Manitoulin must be validated so be prepared to give good directions. For more information, contact The Expositor Office at 705-368-2744.