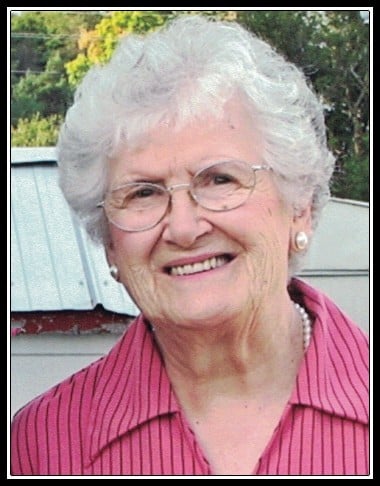 Mrs. Faye Abbott of Delhi, passed away peacefully at her home on Tuesday, July 23, 2019 in her 90th year. Faye was a wonderful wife, mother and grandmother. The former Darline Faye Hall, is together again with her beloved husband, Clarence Abbott (2019). Loving mother of Christine Balazs (Tom), Debbie Greenfield (Alan), Frank Abbott (Janice), and Bill Abbott (Darcy). Cherished grandmother of nine and great-gran-mother of 15. Dearest sister-in law of Sylvia Hall and Bert Abbott (Late Marion, 2018). Predeceased by her brothers, Terry Hall (2016) and Frank Hall Jr. (1950), by her sister, Anita Ackfield (2011) (late Harry, 1994), and by her grandson, Kent Abbott (2013). As per Faye’s wishes, a private family funeral service will take place with inurnment in Cultus Cemetery. Donations to the Cultus Cemetery Board, the Canadian Cancer Society or the Charity of your Choice can be made through the Murphy Funeral Home, Delhi, 519- 582-1290 (mfh.care) and will be gratefully appreciated by the family.