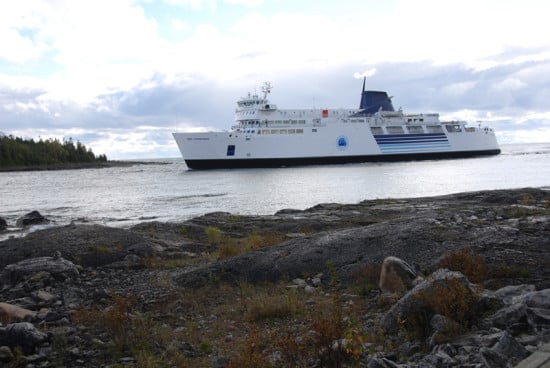 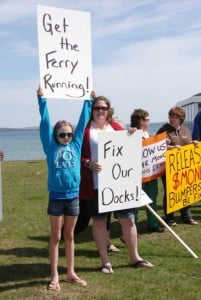 OWEN SOUND—News that the Chi-Cheemaun ferry will finally begin its 2013 season on Friday, May 17 came in early Monday evening. Although the ferry will sail under load restrictions, the news was an immediate social media sensation. Following the posting of the news on the Owen Sound Transportation Company (OSTC) website, a flurry of news releases arrived announcing the details.

“I am tremendously pleased that due to increased and unexpected precipitation over the past weekend the Lake Huron/Georgian Bay water levels have risen to a level sufficient for the Chi-Cheemaun ferry to dock safely at the Tobermory and South Baymouth ferry docks,” said Minister of Northern Development and Mines Minister Michael Gravelle, whose offer to front the money for the repairs from the provincial coffers finally jump-started the process of repairing the ferry dock fenders owned by Transport Canada. “I’m pleased water levels have risen, however to ensure the long term sustainability of operations, we remain committed to moving forward with vital repairs to the wharves.”

The minister noted that the goal of the OSTC and his ministry “has always been to start operations as soon and as safely as possible to avoid serious harm to the local economies and the interests of the people who rely on this service. The province recognizes the importance of these repairs. That’s why we are providing the funding needed to get the work on these federally-owned wharves done as soon as possible, so that regular, full ferry services can begin.”

The OSTC has indicated previously that the ferry will be able to sail while the repairs are underway on the fenders, but in the end, it was the wet weather that came through for the Island’s link to the tip of the Bruce Peninsula.

“This is great news,” admitted a cautious Tehkummah Reeve Gary Brown, who also sits on the OSTC board. “I feel good about it, no question. They will likely have to dump ballast coming in, and they will be loading light, that’s how they can do it.”

“If they are starting to sail I think that is good news,” said Algoma-Manitoulin-Kapuskasing MP Carol Hughes. “The tourist sector will certainly be happy. Unfortunately, there are some people who have already lost a lot of business with cancellations already. I think it was very irresponsible of both the provincial and federal governments to delay until after the eleventh hour had passed. That is a shame, it has had a terrible impact on business and the economy.”

“I am ecstatic,” said Algoma-Manitoulin MPP Mike Mantha after he confirmed the news. “That is really, really good. I am really happy for the people on the Island.” Mr. Mantha noted that he was at first skeptical of the news as he was aware the technical drawings for the fender repairs had not yet been released to contractors to bid. “The work still needs to be done,” he said. “Making sure that work gets done will remain my focus.”

“That is fantastic news,” said cycling advocate Maja Mielonen. “This means the Third Annual Manitoulin Passage Ride will go with the ferry. What a relief.”

The cyclists should be in good shape despite the load restrictions according to the specifications released by the OSTC.

The ferry operator announced that “Lake Huron/Georgian Bay water levels have increased to the minimum required for the ferry to dock safely against the dock fenders at the Tobermory and South Baymouth ferry docks, under restricted load conditions. Ferry load restrictions will be in effect until water levels are at or above chart datum, or when Tobermory dock fender modifications are complete.”

Acceptable within limitations are large vehicles (trucks) under 22,000 kilograms, limited to a maximum of one truck per load and at the sailing master’s discretion.

What is not acceptable are large vehicles (trucks) over 22,000 kilograms.

The ferry service will continue to operate during fender reconstruction, expected to begin in the coming weeks. An agreement has been reached with Transport Canada, the owners of the docks, to permit the OSTC to access the federal facilities and complete repairs. “The OSTC understands the urgency to get the MS Chi-Cheemaun sailing again and are working to complete the construction as soon as possible,” continues the release.

“We aim to please,” said a relieved OSTC President and CEO Susan Schrempf following the announcement. “But safely.” Ms. Schrempf had been awaiting word on whether the sailing could commence for much of Monday.

“The issue is a pressure system that is moving in,” she said. “We have to know what impact that will have on the water levels.”

Ms. Schrempf had previously noted that the ferry operator did not want to start and then stop the service. “That would be even worse than delaying the start,” she said.

An engineering firm has been retained and has started on the design and specifications of the repairs. A provincial government tender to complete the construction work will be released on Tuesday, May 14. To learn more about the provincial government procurement process, and to compete for the contract, companies can visit http://www.merx.com.