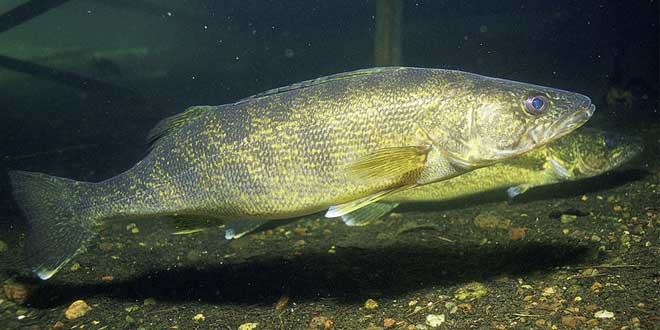 LAKE MINDEMOYA—The final results of the Anishinabek/Ontario Fisheries Resources Centre (A/ORC) broad scale monitoring (BSM) fish study on Lake Mindemoya has had a different outcome in terms of the concerns that had been raised in preliminary results on walleye populations and reproduction. The results of the study will be combined with a similar study carried out by the Ministry of Natural Resources (MNR).

“The last time we talked about the BSM fish study, we had preliminary results and there were concerns that there were no young walleye in Lake Mindemoya and there wasn’t much reproduction,” said Keith Nahwegahbow, fisheries technician with A/ORC. However, he said, “through our gauge analysis of the study we have found there are young fish, but they have proven to be very big fish.”

“In one case we found that a 19-year-old walleye was smaller than a three-year-old walleye, which yes, is completely abnormal,” said Mr. Nahwegahbow. “One of the conclusions we have made from our study is that the introduction of rainbow smelts has produced an extra source of food for the walleye, and they are growing fast and are really big.”

“The older walleye have been found to be growing larger but over a much longer period of time,” continued Mr. Nahwegahow. He noted MNR studies are usually carried out every four or five years, so the last studies were carried out around 2009.

“Yes, the final results of our study are more positive than we had originally thought. We thought there had been no reproduction-spawning taking place with walleye and there were no young fish,” said Mr. Nahwegahbow. “The final conclusion of our study is that the lake is in a state of flux. The lake is changing and walleye are changing, although at this point we are not sure to what extent. The water is good and the food source is good. We will just have to wait and see.”

The A/ORC study will be combined with an MNR walleye index netting survey last fall. The MNR study will provide additional information and insight into the walleye fishery and will be released by the ministry later this summer.