KAGAWONG—Mary Buie is elbow deep in garden dirt as The Expositor catches up to her on a bright mid-spring morning on the weekend. The redoubtable cancer survivor admires the bright yellow daffodils whose heads are poking up on the far side of her driveway.

“Neil and the grandchildren planted them last year when we were not so sure of what directions things were going,” she said. “They are absolutely beautiful. When we are living with cancer you just don’t know what tomorrow will bring.”

Ms. Buie said she loves this time of year. “Green, green, green everywhere and spring flowers,” she said. “The world is just brimming with new life. The bugs are starting to come out too and that brings out the birds and their wonderful spring song and I am happily working around in the dirt.”

It is important to stop and look at the beauty that surrounds us every day, noted Ms. Buie. “Enjoy the beauty while you are here, you will find it all around you in the community, in your family and friends.”

Ms. Buie has just returned from a vacation in Hawaii. “It was the second best holiday in my life,” she said. The absolute best was a safari in Case Solaire in 2009. “But this was marvelous too,” said Ms. Buie. “It was so warm and tropical…and I got to see whales!”

It was a stroke of luck that she and her family were among the last to board the tour boat, she noted. “God looks out for me,” she laughed. “If we had not been sitting in the back of the boat we would have missed it.” A fleeting glimpse of the huge fin of a humpback as it broached the water brought home a singular truth. “We are so insignificant in nature compared to them,” she said. “On the way back we saw a mother and her calf. A slap of the tail and they were down.”

Returning to the docks the coincidences just kept on coming. “They hadn’t been catching any fish there for days,” recalled Ms. Buie. “But when we docked they hauled in a huge what they call Ono, or wahoo.” An appropriate name as the fish was a whopping 27 pounder. “It was the shape of a surfboard and really good eating.”

On the cancer front, the news has been outstanding so far. “My tumour continues to shrink,” she said. Ms. Buie explained that when a cancer metastasizes, moving to another organ as her particularly aggressive form of breast cancer has to her lung, “the cells remain the same.”

There have been other issues not directly related to her cancer that have cropped up that are harder to take in stride, literally. “My knee has been giving me trouble,” she admits. “My physiotherapist told me that is not an unusual thing to have happen when you have radiation treatment. It can be a factor.”

Ms. Buie admits that she probably exacerbated the issue by “walking around without good support.”

But a trip to see M’Chigeeng physiotherapist Derek Debassige helped to put things right. “It is so important for all of us,” she said. “You have to take care of yourself too.” She noted that flopping down in a chair is bad when you get older. “You need to lower yourself down slowly and coming up—don’t flop. These are the bad habits you can get into that will come back to haunt you later in life.”

Ms. Buie is the only remaining Canadian in the trial cancer treatment she is undergoing. “The other person had to drop out,” she said. The Canadian contingent once numbered 10. Ms. Buie herself was nip and tuck on whether she could continue. “My liver enzymes are still high, but they are manageable,” she reports. A good thing, because instead of growing aggressively, her tumour has shrunk 47 percent. “I’m thrilled about it,” she said.

Her son has created a QR code that links friends and family to a website where people can register planting a tree in celebration of the 50th anniversary of her marriage to John Verden Buie. The couple have requested that 50 trees be planted to commemorate the occasion.

Planting a tree is a commitment to the future and to future generations. “Let’s face it,” said Ms. Buie, “with all that is going on right now, this old world can use all the help it can get these days.” 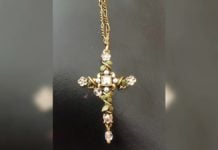