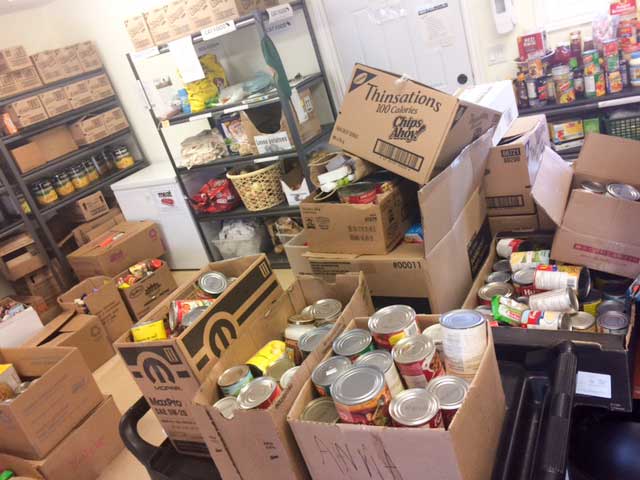 MINDEMOYA—A team of 50 volunteers and a staff member at Manitoulin Family Resources (MFR) worked tirelessly in December to ensure that 864 Island families would have a better chance at a Merry Christmas through MFR’s Christmas Basket program.

“I haven’t heard back from many people, but we know our efforts make a difference. When individuals come to pick up their baskets, I certainly hear a lot of ‘thank yous’ and get a lot of hugs during that week,” says a spokesperson from MFR.

For the spokesperson, the success of the program can be traced back to the volunteers.

“You’d have to imagine, we had flats of food that were delivered and volunteers were carrying bags of potatoes, carrots, onions, meat and organizing all the dry goods. They have the greatest system you can imagine,” the spokesperson says.

Denise LeBlanc, MFR’s executive programs assistant, is the only paid person who had been working alongside the volunteer teams. She has seen the efficiency and organization of the volunteers first-hand.

“For about 25 years, for every year they have been doing it, they have meetings afterwards about what worked, what could we do better for next year,” says Ms. LeBlanc.

It’s a labour of love for the volunteers, according to the spokesperson.

“The volunteers are always cheerful, happy to be there, and this is a big part of their Christmas experience. In one room we had people wrapping gifts together, in another room we had people packing food and warm clothing for each person to get with their food baskets.

Unfortunately, the amount of people depending on food banks increases every year. This is influenced by a number of factors, from changing populations on Manitoulin and impacts from the job market to reductions in social programs like welfare and disability from the Ford government, the spokesperson observed.

The food bank is active throughout the year, not just at Christmas. On average, according to Ms. LeBlanc, the food bank serves 310 people per month throughout the year. MFR also operates a women’s shelter and counselling services for victims of violence, as well as a children’s services program, both of which receive government funding. The food bank, however, receives no funding and is entirely driven by donations from the community and businesses.

The winter months following Christmas are known to be a tougher time for families who must face increased heating costs, the down period between seasonal work becomes available and bills coming in from the busy Christmas season. Ms. LeBlanc says that in mid-January the food bank distributed 28 baskets on one day alone.

September is also a particularly busy time for food banks as parents’ budgets get stretched to pay for school supplies such as backpacks, clothes and stationery. During the winter months, the food bank shuts down on Mondays due to a lot of its volunteer force being away from Manitoulin.

Another issue with which the food bank has to contend is the geographic area it serves. It takes an hour and 15 minutes each way to drive from Mindemoya to Meldrum Bay, and another half hour between Mindemoya and Little Current.

“What we’re seeing is a lot of the more isolated communities are not accessing our food bank. The West End has particularly low numbers, but we know their populations are similar to others. We’re working on partnerships with volunteers and organizations like the Lions Club and United Church to help distribute food and make the program more accessible,” says the spokesperson.

MFR accepts donations for the food bank and its thrift store year-round. More information can be found at MFResources.net or by calling 705-368-3400.