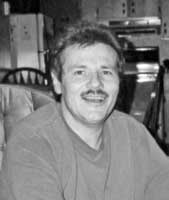 Frank Gerald Silcher of Manitowaning passed away suddenly at Manitoulin Health Centre on Saturday, August 3, 2013 at the age of 60. Beloved husband of Mireille “Mir” (nee Gaudette). Proud father of Scott (Rachiel) and Amanda. Dear son of Hilde Silcher (Gerhard predeceased) and brother Rob (Cathy). Will be missed by in-laws Denis, Carole, Alain, Sylvie, Helene and Pierre “Pete”. Missed most of all by dog Lucy. Remembered by many nieces and nephews. Frank`s dream was to retire on the Manitoulin. That dream became a reality 17 years ago, retiring from IMPAC as a property assessor in Timmins. His favourite pastime was walking Lucy. He loved CFL, NFL and NASCAR. All was well when AC DC was playing loud! A Graveside Funeral Service was held at 2 pm on Tuesday, August 6, 2013 at Hilly Grove Cemetery. Donations to Alzheimer or a Cancer Charity would be appreciated.