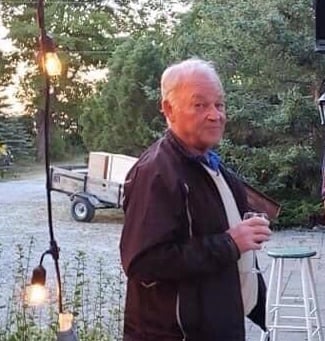 FRANKLIN ‘FRANK’ LEE GOLDER
July 21, 1944 – August 11, 2020
It is with profound sadness that we need to announce Frank passed away unexpectedly at home on Tuesday, August 11, 2020. Franklin Lee ‘Frank’ of Belle Ewart, Ontario, formerly of Little Current, Manitoulin Island. He just celebrated his 76th birthday. Devoted father of Michael Golder of Little Current, Manitoulin Island and Tammie Sarra (Vito Ierullo) of Mississauga, Ontario. Partner of over 30 years to Anne Bednarz of Belle Ewart, Ontario. Proud Poppa of Beth, Tristin, Mason and Tanner of Little Current, Manitoulin Island, and Michael and Anthony Sarra of Mississauga, Ontario. Frank was honoured to have been the step-dad and step-poppa to Ann’s children and grandchildren. Frank was the second born of Hazen and Vicki Golder arriving July 21, 1944 in Woodstock, N.B. He was the loved brother of seven. Fondly remembered as the ‘short one’ by Hazen (Jane), Nanaimo, B.C., Dianna (Charles Hachey), Bathurst, NB, Colin, Diamondhead, Mississippi, Liz (Ron LeDrew), Perth, Ontario and Harley (Faye), Telkwa, B.C. Predeceased by his parents Hazen (1996) and Vicki (2016) and by his brothers Herbie (1963) and Paul (2012). Also survived by, in the Golder Clan, 13 nieces and nephews, 20 great-nieces and great-nephews, five aunts and uncles and many cousins in both Canada and England. Frank Golder was an auto mechanic and bodyman by trade having owned and operated his own business on the Island and in Espanola, Ontario for many years. He loved to work alongside his son restoring and bringing life back to older models. He was respected in his trade by all who worked alongside him. Frank was an avid golfer and loved getting out on the course especially with his brothers Hazen and Colin and his son-in-law Vito and played often with Ann at their local course. Due to Frank’s wishes, there will be no funeral. A Celebration of Frank Golder’s Life will be held Saturday, August 22, 2020 in Meaford, Ontario. In memory of our dad, brother, poppa, partner and friend, please consider a donation to the http://canadianassociationforporphyria.ca/.