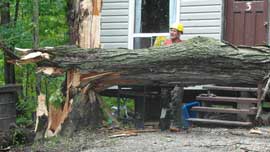 PIKE LAKE—Almost seven years to the day of the anniversary of the microburst that tore through parts of Manitoulin, Sheguiandah among the hardest hit communities, a second possible microburst struck the Pike Lake area of Sheguiandah/Green Bay on Friday when forecasters were warning of possible tornadic activity on Manitoulin.

Bill Johnstone lives on the Indian Mountain Road side of Pike Lake and explains what he saw at 8:45 on Friday morning. “It’s like someone took a brush and painted the shore white,” he said. “The rain came in vertical—it just came right at me. It took about 10 seconds to get from the Strains (Bill and Linda Strain’s cottages on the opposite side of the lake) to me. I was just in awe.”

“There was a boat across the lake, which just disappeared,” Mr. Johnstone continued. “The next thing you know it just hit us—boom!”

“To me it was a tornado,” he added. Mr. Johnstone was fortunate enough to not sustain any major damage, losing a small tree, but said he saw an iconic Manitoulin split rail fence tossed like kindling into a ditch and his neighbour’s hay field completely flattened.

Ron Stewart and Dr. Scott Wooder were the fishermen spotted by Mr. Johnstone, out on Pike Lake for an early morning fish.

When contacted by The Expositor, Mr. Stewart’s initial reaction was, “It was horrifying.”

Mr. Stewart, who said he has some meteorological experience during his time as a private pilot, said the day began with an application of sunscreen and ended in terror.

“No sooner than we got out there, there wasn’t a grey sky, but a pure white sky,” he recalled, adding that he’s seen the people of tornado alley being interviewed on television saying there was no reaction time and while once skeptical, he now knows full well what they mean.

Within that white wall of rain, Mr. Stewart said he saw what appeared to be a funnel cloud touch down and head in the direction of the Strain property.

“I was concerned because my two sons were in other boats on the lake,” he said. “My son turned to shore and just gunned it. I stayed where I was.”

While in the thick of the white wall of rain and wind, the boat’s stern was picked up and dropped again. “The prop didn’t come right out of the water, but I had no control,” Mr. Stewart said, explaining that he has a 14-foot fiberglass fishing boat.

Once he and Dr. Wooder made it to shore, to the boat launch at the Strain property, the pair saw the destruction that wall of white had caused. The scenic road that led to the four rental cottages was completely hidden as trees and debris were strewn everywhere.

“There’s this one tree that’s completely twisted, I mean, are you kidding me?” he said incredulously. “I think it was a tornado.”

“It was beautiful,” Bill Strain said of the entrance to his secondary cottage rental property, Whitehaven Cottages, which was once lined with hundred-year-old maple trees that created a picturesque canopy.

“There’s damage as far as I can see, it’s the worst I’ve ever seen,” he added.

The Strains lost an estimated 150-200 trees, one of them twisted like a corkscrew, a shocking reminder of just how powerful that storm event was. Thankfully, none of the fallen trees landed on a cottage, a car or a hydro line.

“I just had cataract surgery on Friday and I’m not supposed to bend or lift anything,” Mr. Strain admitted. “I’m not going to worry about it much until the fall. Lou Shortt was my saviour. I thank him very much. He’s a lifesaver.”

After the fishermen made it to shore, they clambered over the fallen trees and made it to the Green Bay Road where they waved down the first vehicle they saw. Fortuitously, that vehicle was driven by Curtis Shortt, son of Lou and Julie Shortt of Orangutan Tree Service. After giving the gentlemen a ride, Mr. Shortt contacted his parents who quickly assembled a crew and headed for the property. Six hours later the roadway was cleared.

Gail and Paul Lefebvre and Jeff and Ann Hansford are long time cottagers with Whitehaven Cottages and were on Manitoulin for their annual two-week trip when the storm hit.

Mr. Lefebvre and Mr. Hansford were bailing out the boat they were hoping to head out on the lake with when dark clouds rolled in, they explained.

“We suddenly saw it and ran for it,” Mr. Lefebvre said of the storm. “It was instantaneous.”

“It went from suddenly sunny to black,” Ms. Lefebvre added. “The sound was just deafening.”

Ms. Hansford said she was outside when she heard the incoming storm “and something just told me to run,” the cottager explained. “I watched the tree in front of the cottage crack then fall.”

“Things were flying all around the cottage,” Ms. Hansford added. “It seemed to last forever.” The two women said their cottages shook upon impact.

The couples both agree—to them, this was a tornado.

As it is always the same two weeks in July the two families come to Manitoulin, this isn’t their first experience with inclement weather, having been here for the microburst seven years ago. This latest wild weather won’t deter them either. “No way!” they said.

The Expositor spoke with Peter Kimbell, meteorologist with Environment Canada, on Monday morning. While he had not heard of any reports of activity on Manitoulin, he was not surprised.

In the North, much of the destruction was “straight line damage from downbursts. We did have tornado warnings, but none were reported,” Mr. Kimbell said.

A swath of destruction less than four kilometres is considered a downburst, or microburst, and according to Mr. Kimbell, a path 100 metres across and three kilometres wide was reported in Massey on Friday, with damage occurring to one home. This could possibly been caused by a tornado, he said.

However, “everything else we have investigated across the province were downbursts, so we don’t have any reason to believe it to be tornadic.”